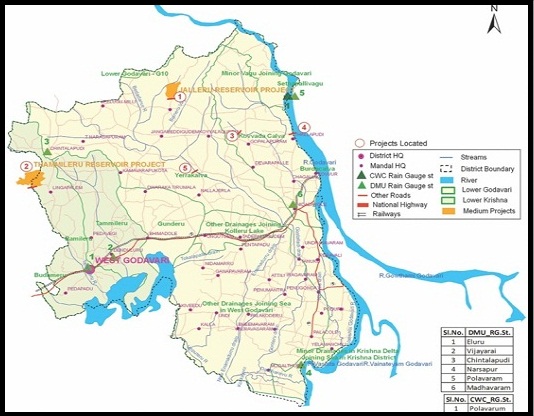 West Godavari District is carved out of Old Godavari District and as the Western Delta of the River Godavari it was appropriately named as West Godavari with Head Quarters at Eluru and bounded on the North by Khammam District on the South by Krishna District and the Bay of Bengal on the East by the River Godavari and on the West by Krishna District. The West Godavari District was formed in the year 1925. It lies between 16° 15' and 17° 30' of the Northern latitude and 80° 55' of the Eastern longitude. It was divided into three natural regions (i.e,) Delta, Upland and Agency areas. It has an area of 7742 SqKm. It has four Revenue Divisions namely Eluru, Kovvuru, Jangareddigudem and Narasapuram having 16,12,6 and 12 No of Revenue Mandals respectively.

The district lies in the River basins of Godavari, Yerra calva, Thammileru Gunderu, Ramileru and Kolleru. The district comprises of 48 mandals out of which 19 mandals upland and 29 delta mandals (including semidelta)

Godavari is the important river flowing in this District. This river borders the entire eastern boundary of the District. At Vijjeswaram, the river breaks into two branches namely, the Gowtami Godavari (Eastern Branch) and Vasista Godavari (Western Branch) and flows towards the South of the District before emptying into the Bay of Bengal near Antarvedi.The other Minor rivers which feed the Irrigation tanks in the upland areas are Thammileru, Yerracalva, Byneru, Kovvadacalva, Jalleru and Gunderu. 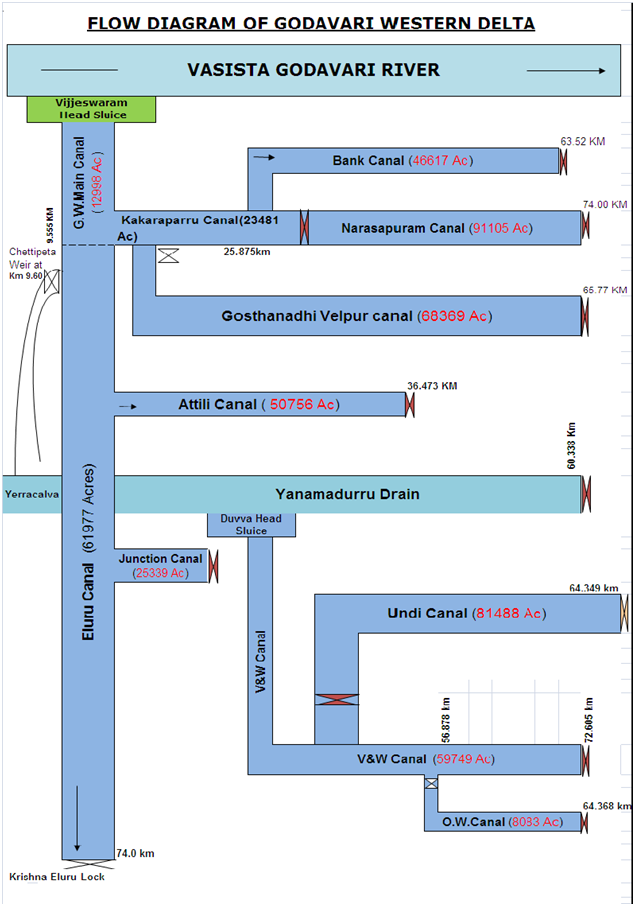 ( Part Of Krishna Barrage On Krishna River At Vijayawada) 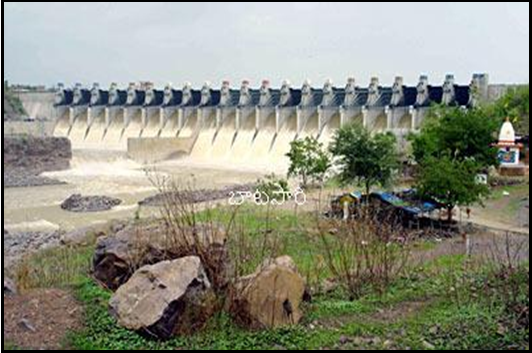 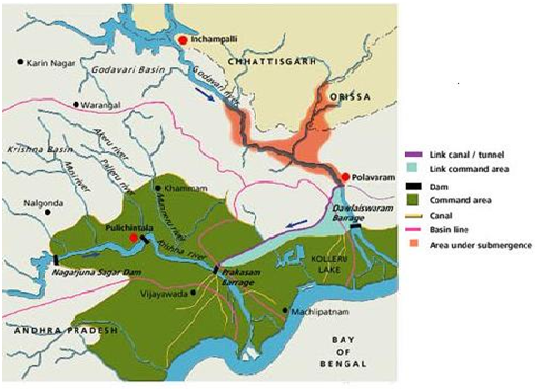 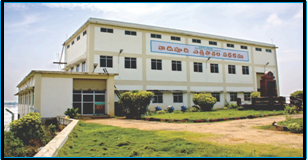 The Government of Andhra Pradesh have accorded Administrative Approval for Rs. 23,740 lakhs. The scheme is contemplated to provide irrigation facilities to 14 mandals of West Godavari district. The scheme also provides drinking water facilities to 5.40 lakh population enroute the canal system. The lifting of water is proposed on Godavari at km 26.2 of Akhanda Godavari right bank.

1) Get early benefits of Polavaram Project under Right Main Canal.
2) Balance Irrigation Potential of 1.20lakh Acres in Krishna and West Godavari Districts will be provided with water early.
3) Facilitates in raising early seed beds in Krishna Delta and stabilizes the Krishna Delta ayacut.
4) Meets drinking water and Industrial water needs in the command areas.
5) The Krishna water thus saved in Krishna Delta due to augmentation from river Godavari can be retained in Srisailam Reservoir.
6) The water so retained in Srisailam Reservoir can be utilized for the surplus water based Projects of Rayalaseema i.e., HNSS, GNSS, Telugu Ganga and the Irrigation, drinking water and industrial water needs of the Rayalaseema Region can be met.
7) Proposed to lift 8500 Cusecs of water from River Godavari near Pattisam village. Deliver into Polavaram Right Main Canal at about Km 1.50.
8) It is proposed to transfer about 80 TMC of Godavari water during flood season to River Krishna. 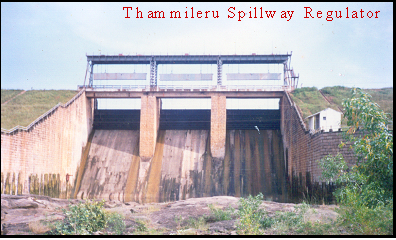 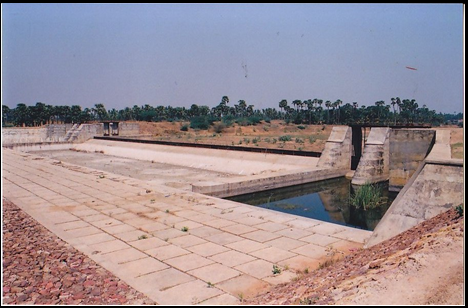 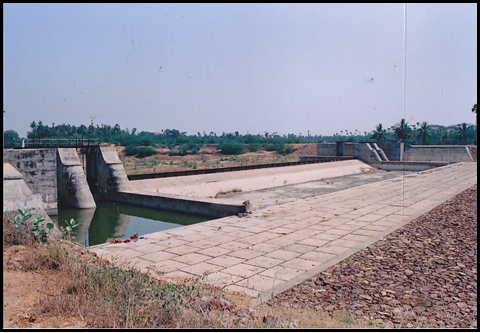 To divert water from self catchment area of Thammileru below the Thammileru Reservoir Project and also to ensure proper distribution of water left down from the Reservoir was constructed an anicut across Thammileru near Vijayarai (3857 Acres) in West Godavari District +3864 Acres in Krishna District) with distribution system to stabilize the existing ayacut of 10,721 Acres under Minor irrigation. 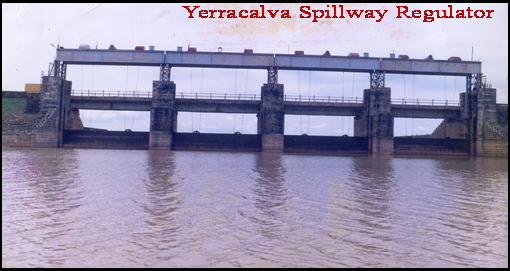 The Yerracalva Reservoir project constructed across Yerra calva near Konguvarigudem village in Jangareddygudem mandal to provide irrigation facilities to an extent of 24,700 Acres with an additional ayacut of 9660 Ac thus a total of 34,360 Ac in 22 Villages through Right and Left main canals.

Details of Canals and Ayacut

There is 1 Project Committee, 5 WUAs formed and are functioning

Lift irrigation scheme was constructed on Giramma tank ie. Km 11.280 on right main canal at East Eadavalli village of Kamavarapukota mandal, West Godavari district to provide irrigation facilities to 6656 acres as additional ayacut in Kamavarapukota and Dwarakathirumala Mandals. The pump house was constructed, tenders for the balance work is called and the works are in progress . The required land is about 30 Acres.

AThe left main canal proposed to extend to provide irrigation facilities to an extent of 3000 acres as additional ayacut in Jangareddigudem mandal. Tenders for the balance works are called and the works in progress. Land required is 17.07 Acres. At present the water is supplying only 15000 acres under this project against localized ayacut of 24700 acres. 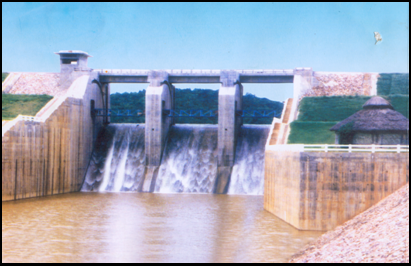 The Project Constructed across Kovvada calva near L.N.D peta of Polavaram Mandal. The scheme also contemplates drinking water facility to 15 Villages enroute the canal benefiting a population of 35,000. 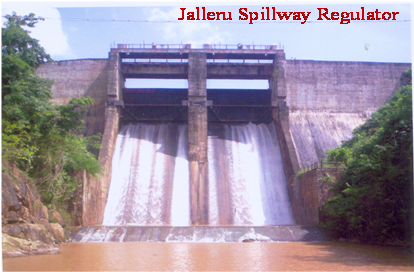 Due to construction of above Project (i) Yeraigudem (ii) Aliveru Villages were submerged. About 100 families of the above villages were rehabilitated at Doramamidi Village.