The Population of the District is 29.66 lakhs (Census 2011). The main rivers, which flow in the District, are Pennar and Swarnamukhi. Other streams that are occasional and torrential in character are Kandaleru, Boggeru, Beeraperu, Royyalakalva, Tsallakalva, Mamidikalva, Chippaleru and Kalangi etc., All these rivers and rivulets will bedry for major part of the year and carry heavy flash floods during rainy season. The Pennar river is the most important river and it is a boon to the eastern half of the mandals in SPSR Nellore and Kavali Revenue Divisions.

The Pennar river Canal system was established during the British Regime. The Pennar Delta system comprises of two systems viz., SangamAnicut system and SPSR Nellore Anicut system. Trough the two systems are distinctly separated by the River Pennar, the entire system is to be reconed as one, since the supplies to the both the systems are from Pennar River only. The network of Pennar River canal system are compact and studded with subsidiary tanks. Prior to the construction of the two Anicut, these tanks were filled through open channels from the river during the floods. Principal storage reservoirs are Kanigiri Reservoir and Nellore tank in Sangam Anicut system and Survepalli Reservoir in Nellore Anicut system. Besides these reservoirs, there are several tanks in both the systems. The total ayacut contemplated under Pennar Delta is 1,75,000 Acres and the extent of ayacut developed is 2,47,000 Acres. The modernization of Pennar Delta system was taken up under "Jalayagnam Programme" by theGovernment of Andhra Pradesh and the same is in progress.

Sangam anicut was constructed across Penna river during 1882-1886 contemplating to supply water to SPSR Nellore tank supply channel and Kanupur canal on right side and Duvvur canal, Kanigiri main canal and Kavali canal on left side. This anicut is the life line for the irrigation of about 3.85 lakh acres now being irrigated. The following are the details of ayacut fed with the water from Somasila reservoir.

Sangam anicut was constructed across Penna River during 1882-1886

During course of time thousands of acres of additlonal ayacut was brought into cultivation. It has became a regular practice to increase the water level by 0.90 mtrs., above crest level of Sangam anicut by providing sand bags of 1.20 mtrs., height over the crest for the entire length for providing commandability to the existing ayacut under Kanupur and Kavali Canals. This practice of placing the sand bags over the crest of anicut is resulting in recurring cost in lakhs of rupees for Government every year. Unless the anicut is replaced by a new one, the anicut is likely to prone for breaching due to over age (crossed 100 years).

The Penna river canal system consists of the Nellore Anicut system and the Nellore tank, together with the Sangam anicut system. The oldest reservoir under the Penna is the Nellore tank which originally received its water by a channal taken off from the river in the neighbourhood of Mulumudi and which also acted as a catch channal to receive the water of the Ludums which raise near Aiyagaripalli, Podalakur etc., In 1854-55 the Madras Governement constructed the anicut at SPSR Nellore across the river to secure certain supply of water for all the tanks in the Southern delta and also sanctioned improvements to the Nellore tank. After few failures the present structure was designed by the famous Engineer Sir Arthur Cotton and was completed in 1862-63 and has stood admirably. The crest of the anicut is 9.61 feet above the bed of the river and 42.55 feet above the sea level and its length is 2,040 feet. In place of it the new structure is proposed and the salient features of the proposed structrure are as follows. 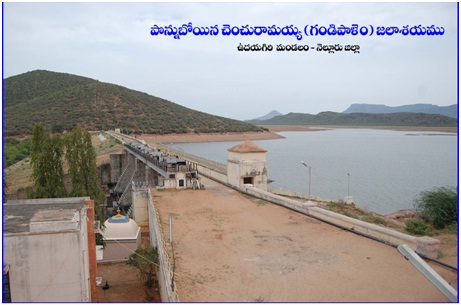 The Construction work on the project was commenced during the year 1975 and completed in 1981 at a cost of Rs.6.56 Crores. It was contemplated to irrigate an ayacut of 16,000 Acres. 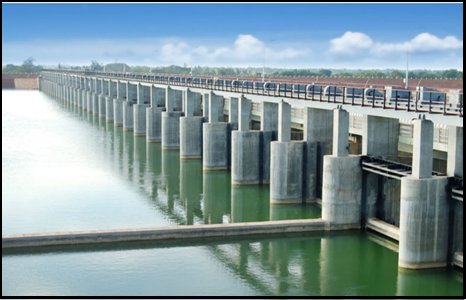 The Kanupur Canal System was started in 1959. Kanupur canal scheme is a medium irrigation projects. Which is designed to draw flood water from Pennar River through head sluice located in the right side of Sangam Anicut, to stabilize 17,000 acres of wet ayacut under 85 M.I tanks in stage I and to create an irrigation potential of 44,000 Acres of ID under stage II.Against the ayacut contemplated under stage I. 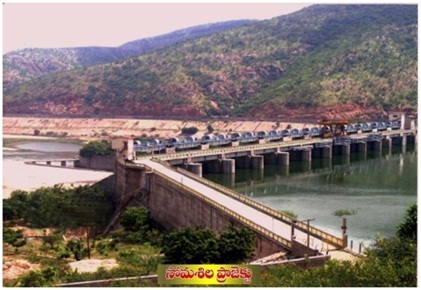 Somasila Reservoir is constructed across River Pennar near Somasila, village of Ananthasagaram Mandal in SPSR Nellore District of Andhra Pradesh.

The Project envisages storage of 78.00TMC of water at F.R.L. +100.58M. The contemplated ayacut under the project is 5, 84,500 acres in SPSR Nellore and Prakasam Districts. Out of which stabilization of wet ayacut under Pennar Delta Kanupur canal system and existing tanks in up lands is 4,05,500acres and new I.D.is1, 79,000 acres. Out of the above ayacut an extent of 82,500 acres stabilization and 1,35,000 new I.D is under Somasila Project canals viz., GKNC Canal (North Feeder Channel ), south feeder channel and Kavali canal.The allocation of water for the above ayacut is 60.892 TMC. It also envisages to transmit 30.00 TMCof water to Kandaleru Reservoir under Telugu Ganga Project for irrigating 3, 00,000 Acres of I.D. ayacut in SPSR Nellore and Chittoor Districts besides 15.00 TMCof Krishna water to Chennai city for drinking water purposes. In addition to the above 2.40 TMC of water was allocated to SPSR Nellore, Kavali, Gudur and Tirupathi towns for drinking water needs.

The Andhra Pradesh State Electricity Board has sanctioned 2 x 5 M.W. Mini HydelScheme for Power Generation at Somasila Dam, SPSR Nellore District for captive utilization in G.O. M.S.No.180, dated 29.12.1994 in favour of M/s.Balaji Power Corporation Private Limited. Further the Government in G.O.Ms.No.100 I&CAD. TGP-I(2) Department, dated 9.7.1999 have issued no objection certificate to hand over the scheme to the said firm for implementing the Power Project. Accordingly the firm has executed the Mini Hydel Project including civil, electrical and mechanical works and water is being supplied to power house and project is commissioned in the year during December 2005and it is enhanced to 2 X 6 MW i.e. 12 MW. Approval accorded for an additional capacity of 11 MW and will come into operation in due course.

Telugu Ganga Project is an Inter-State Project formulated to irrigate 5.75 lakh acres in drought phone areas of Rayalaseema and uplands of SPSR Nellore District in Andhra Pradesh by utilizing 29TMC of Krishana flood flows and 30TMC of Pennar flood flows. Further it is also provides drinking water to Chennai City utilizing 15TMC of Krishna water with 5 TMC share of each state of Andhra Pradesh, Karnataka and Maharashtra.

The Project is cleared from environment and forest angles. The hydrological clearance is yet to be received form the Central Government. It is approved ongoing project.

The Somasila Kandaleru Flood Flow Canal starts from Somasila Reservoir taking off through Right Head Regulator and joins into Kandaleru Reservoir. It is intended to carry flood waters of Pennar River along with 15.00TMC of Krishna Water to Kandaleru Reservoir with discharging capacity, of 339.8 Cumecs (12000C/S) and having a total length of 51.25Km. The water thus carry by the SKFF canal is stored in the Kandaleru Reservoir to cater the needs of drinking water to Chennai City Tirumala, Tirupathi and Srikalahasti towns and Irrigation to an extent of 2,21,810 Acres I.D. and 71, 519 wet stablisation in SPSR Nellore and Chittoor Districts.

The Kandaleru Reservoir was formed across the Kandaleru River near Chellatur Village in Rapur Mandal of SPSR Nellore District. The Kandaleru Reservoir is intended to impound the flood waters of River Pennar to provide irrigation facilities 3.00 lakh acres in SPSR Nellore and Chittoor Districtsand to supply 15.00 TMC of Krishana waters to Chennai City for drinking purpose.There is also a provision under lower riparian rights to stablise 10500 acres wet ayacut under Manubolu system of tanks (9Nos).

The following are the sub components of Kandaleru Reservoir. a) Main Earth Dam b) Rehabilitation and Resettlement Works. c) Approach Channel, Head Regulator, and Power Sluice and Dyke bund.

The Kandaleru earthen dam is a balancing reservoir across Kandaleru River near ChellaturVillage of Rapur Mandal. The FRL/TBL of Reservoir is +85.00/+89.00M with a gross storage capacity of 68.030TMC. The length of Reservoir bund is 10.752Km. The MDDL of Reservoir is +64.00m with a dead storage of 8.42TMC. The Reservoir is provided with one high level sluice on the extreme left flank (0.990km) with +74.00m sill level to feed 20700 acres I.D under K.R. Left Canal and one low level sluice at Km.7.550 with sill level +58.00m to supply water to lower riparian ryots covering 10,500 acres wet ayacut under Manubolu system of tanks. The head regulator to SatyaSai Ganga (Kandaleru Poondi) Canal is situated in the dyke portion with +60.000m sill level is with 5 vents and 3 pen stocks.

The formation of earthen dam is completed and protection works are in progress and it is in operation since 1996.

The expenditure incurred upto 3/2015 is Rs. 332.63 Crores. The balance works are at different stages and they are programmed to be completed before 12/2015. 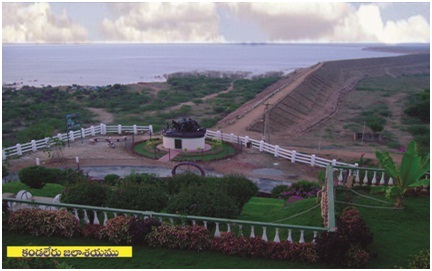 The ayacut an extent of 1,32,672 acres is being held up for want of Forest clearance in SPSR Nellore & Chittoor Districts for which the Government has given clearance for the diversion of forest lands to an extent of 313.63 Ha from the forest department vide G.O. Ms No 26 dated 27.02.2015. The executive agencies have commenced the works in the acquired forest lands in 2A, 2B, 4th Branch Canals (Package 39), 5 and 5A Branch Canals (Package 40) and KR Left Canal (Package 9).

The Somasila Swarnamukhi Link Canal is proposed from Km. 12.520 of Somasila Kandaleru Flood Flow Canal and runs for a length of 100 Kms, through the drought prone areas of Rapur, Venkatagiri, Srikalahasti, ErpeduMandals and ends into Marlapaka Tank in Erpedu Mandal of Chittoor District. Originally the Government has accorded Administrative approval for Rs. 240.00 Crores vide G.O. MS. No. 58, dated 30-03-1999. The revised feasibility report has been sent to the Government for Rs. 420.00 Crores and the revised administrative approval accorded by the Government 06/2006 vide G.O. MS. No. 99, Dt 26-05-2006 for Rs. 399 Crores. The scheme is intended to provide Irrigation facilities for stabilization of 97,000 acres of wet ayacut and 26,000 acres new I.D ayacut under 316 M.I. tanks in SPSR Nellore and Chittoor Districts and also to meet the drinking water needs in the enroute Mandals. Out of this an extent of 78,300 acres wet stabilization and 14,000 acres New I.D is in SPSR Nellore District.

Providing irrigation facilities to the ayacut lying between S.K.F.F canal and S.F.C of somasila project in SPSR Nellore district

Somasila High Level Lift Canal Scheme is intended to divert 5.0 T.M.C. of Pennar flood waters from Somasila reservoir to provide Irrigation facilities to the upland drought prone area in Udayagiri and Atmakur Constituencies to an extent of about 90,000Acres in Marripadu, Duttaluru, Atmakuru, Vinjamuru, Udayagiri and Ananthasagaram Mandals in SPSR Nellore District besides providing 0.2 TMC for drinking water to the 58 Revenue Villages in Six mandals enroute for a projected population of 2,35,266 by 2041.The work has been awarded to M/s. MEIL-Prasad (JV), hyderabad for Phase I works for creating an I.P. of 43200 Acres and the work is in progress.

In SPSR Nellore District, there are 1704 Nos Minor Irrigation Tanks with an ayacut of 267830 Acres.

There are 95 Minor Irrigation tanks are feeding tanks.

Capacity Table of the Major Reservoirs.