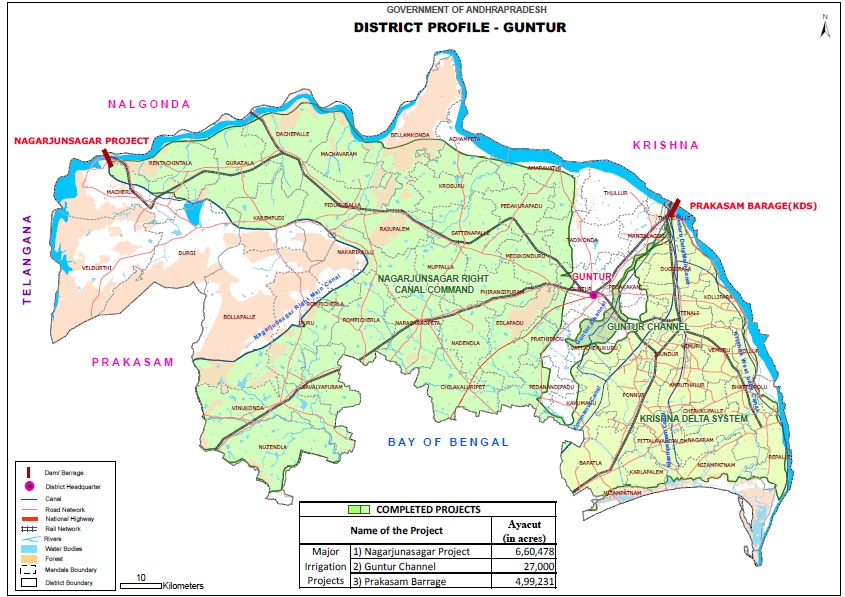 The Guntur district was formed on 1st October 1904 with head quarters at Guntur.57 Mandals have come into existence with effect from 25.05.1985 in Guntur District in place of erst while taluks and Firkhas.

The population of the district is 48,87,813 persons as per census 2011. The District is bounded on the North by Krishna and Nalgonda district of Telangana State, on the west by Prakasam and Mahaboobnagar districts on the South by Prakasam district and on the East by Krishna district and Bay of Bengal. It is situated between 150° -18' and 16°-50', of the Northern Latitude and 70°-10' and 80°-55', of the Eastern Longitude.

The District is rich in mineral resources. The principal minerals available are lime stone, lime kankar, copper and lead. Limestone is being utilized by the Cement factories. There are copper mines at Agnigundala of Ipur Mandal.

The District head quarters is connected with broad gauge railway line from Secunderabad, Guntakal, Bangalore, Visakhpatnam and Chennai. The area of the district is mainly covered under major irrigation i.e. Nagauna Sagar Jawahar Canal and Krishna Western Delta & Guntur channel and No. of other minor irrigation sources.

The Average rain fall of the District is 1072.60 mm. The climate is generally warm in Summer and the heat is very severe in Rentachintala. The important rivers in the district are the Krishna, Gundlakamma, Naguleru and Chandravanka. The river Krishna travels about 250 Kms, along the border. 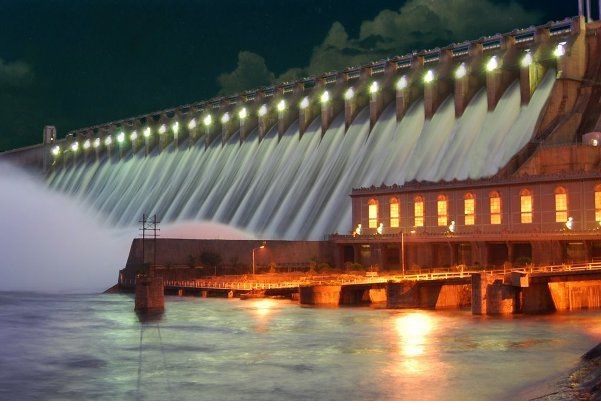 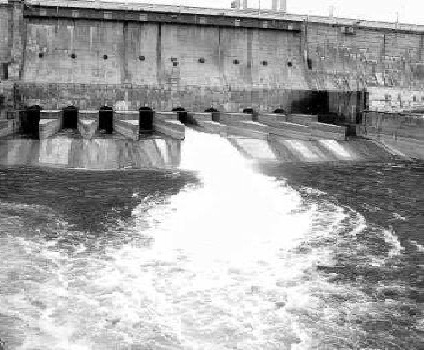 The multipurpose project constructed on the river Krishna is located near the then Nandigonda (Village now Hill colony) in Nalgonda District is the pride of Independent India. This is the largest and highest masonry dam in the world. About 21.25 lakh acres ayacut has been created under two Main Canals i.e. Right Main Canal (Jawahar Canal) & Left Main Canal (Lalbahadur Canal). The districts benefited under NSP are Guntur, Prakasam, Krishna, Nalgonda, Khammam and West Godavari. 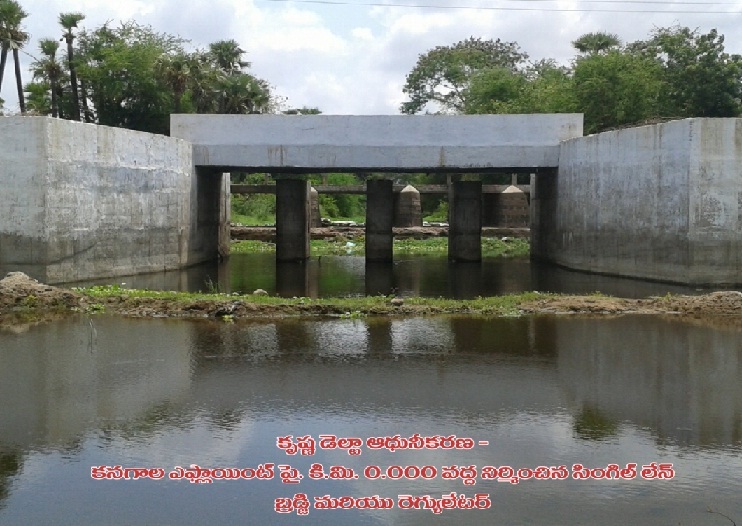 The Prakasam barriage (i.e., Krishna Delta System) was constructed across River Krishna to serve an ayacut of 13.09 lakh acres in Krishna, West Godavari, Guntur and Prakasam districts. The Krishna Western Main canal takes off from Right Bank of Krishna River near Seethanagaram U/s of Prakasam Barriage in Guntur District and serves the ayacut located in Guntur & Prakasam Districts.

The following are the main canals in K.W.Delta

The following are the Major Basins in Krishna Western Delta System

All the drains are flowing from West to East crossing the above canal system.

Kondaveetivagu is a Major Drain in Krishna River Basin. It originates from Kondaveedu hill ranges near Perecherla village in Guntur Dt.

In view of enormous loss being caused to the produce of Agricultural lands every year by the flood of Kondaveetivagu and its infalling drains in Guntur Dt.,it is proposed for Modernization of Kondaveetivagu and its infalling drains.The administration Sanction was accorded vide G.O. Ms.No. 455, Dt;- 23.7.2011 for Rs.49.70 crores. 3 No.of packages consisting of Modernisation of Kondaveetivagu & its infalls with an Agreement amount of 21.34 crores are grounded.The vagu flows through newly formed capital region and preparation of Master Plan is in progress. At present works are stopped to take a final call after preparation of Master Plan. 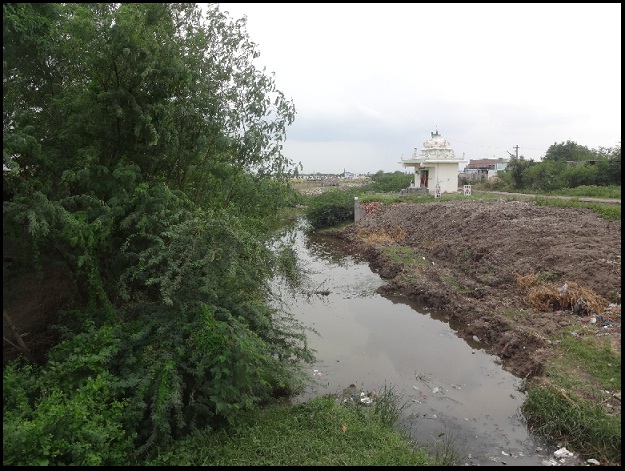 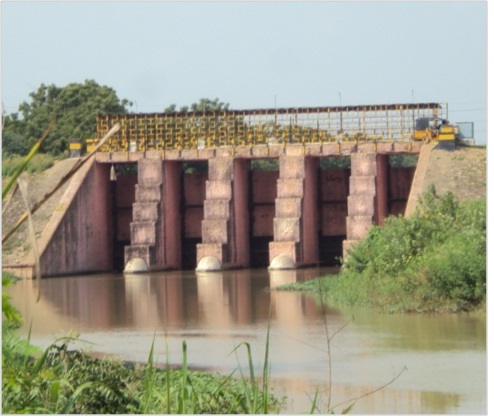 Guntur channel is a Major Irrigation Scheme having 27000 Acres of Aycut. in During 1967, it was contemplated to suffice the left over patches of lands between NSP ayacut and KW Delta by a new channel. And hence , the existence of Guntur channel came in the picture with a carrying capacity of 600 Cusecs to utilize 4.00 TMC of water. The channel takes off from Right bank of river Krishna upstream side of Prakasam barrage in Guntur district. The channel runs in a strata of black cotton soils mixed with fine sandy texture having predominantly slippery in nature at side slopes.

Modernization of Guntur Channel system is proposed and Estimates are under preparation .This channel fulfills the drinking water needs of Guntur Muncipal corporation & Mangalagiri Muncipalitiy and to supply drinking water to 38 tanks in 33 villages.

Dr K.L.Rao Sagar Pulichintala Project is a balancing reservoir constructed across river Krishna near Pulichinta Village, Bellamkonda (M) in Guntur District (85.0 Km upstream of Prakasam barrage and 115.0 Km downstream of Nagarjuna Sagar Dam), for storing 45.77 TMC of water for stabilization of existing ayacut of 13.08 Lakh acres of Krishna delta and for early transplantation of paddy crop during June and July.

Erection of 24 Nos. Radial gates including hoisting arrangements completed. Erections of top wall plates for Radial gates are in progress

Erection of River sluice emergency & Service and fixing of side guides completed.

There is an Agreement provision for 4 nos of penstocks to be erected. As per scope of agreement 2 penstock gates with hydraulic hoist is to be erected by the EPC Agency.

The fabrications of 4 penstock ferrules are completed. The Fabrication and Erection of 2 Penstock gates and 2 Hoist are to be done. Trash rack works ( Ring Beam, Cross Beam, Slab, Errection of Trash Rack Frames and 2nd stage concrete and fixing of E.M Parts, Transition portion section I-I) are to be completed

The following are the Major Basins in Krishna Western Delta System

All the drains are flowing from west to East crossing the above canal system.

Modernization of Canals & Drainage system under Krishna Delta system is taken up with a cost of Rs. 4573.00 Crores vide Administrative Sanction G.O. Ms.No.259, I&CAD (PW: MAJ.IRR.VII) Dept., Dated 29-11-07. 29 No.of packages consisting of Canals ,Drains and Dredging work with an Agrement. amount of 1321.26 crores are grounded and are all at various stages of Execution .So far about 49.36% of work is completed.

3. Statement Showing the Ayacut Particular In Respect Of Guntur Channel

4. Statement Showing the Particulars under Minor Irrigation (M I Tanks)