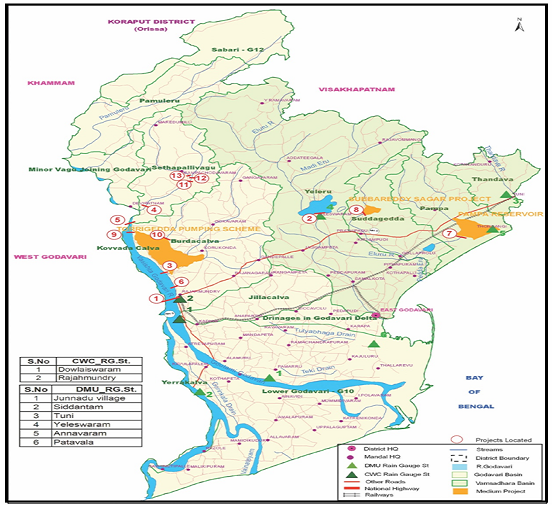 East Godavari District lies in between 16° 30' to 17° 00' N Latitude and 81° 30' to 82° 30'E Longitude and occupies a geographical area of 10,807 Sq. Km. spread over in 60 Mandals with population of 51.515 lakhs (2011 census). The East Godavari District is bordered by river Godavari on West and Bay of Bengal on Eastern side. The district flourishes with lands of fertile soils, good rain fall and balance climatic conditions and possesses all the nature's hand work like perennial rivers, mountains, forests and also the sea coast. The district is enriched by huge water resources of River Godavari and major streams like Yeleru, Suddagedda, Pampa and Thandava. The Delta coastal line is around 150 Kms in the Eastern sea board of India with minor ports at Kakinada and Odalarevu. The mean annual rainfall precipitation is 1219 mm and is mostly confined to the period from June to November. 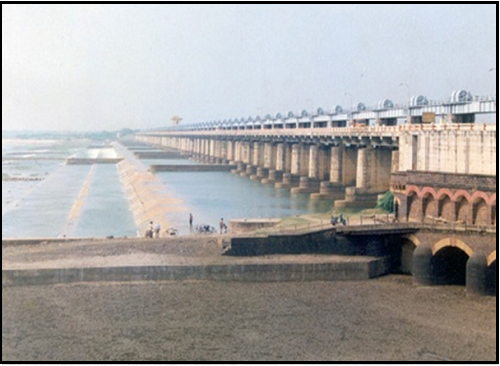 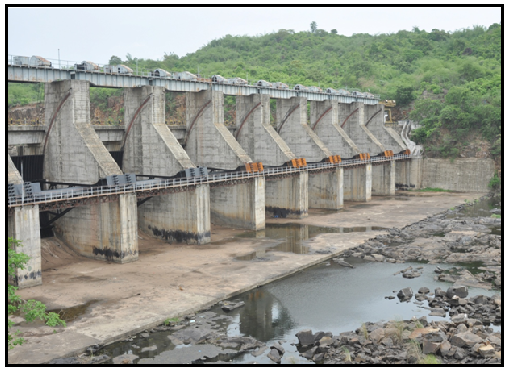 Yeleru Reservoir Project (Y.R.P.) envisages formation of earth dam across river Yeleru to form a Reservoir near Yeleswaram Village in East Godavari District with gross storage capacity of 24.110 TMC. This Project is proposed to be implemented in two phases.

(i) The Phase - I of the project envisages to supply 73 million gallons per day of water to the steel plant at Visakhapatnam and to stabilize 67,614 acres of existing ayacut of Yeleru Irrigation System. An allocation of 23.440 TMC water for Visakhapatnam was provided in Polavaram Project report under Left Main Canal.

(ii) The Phase - II of the project envisages to irrigate an extent of 1.55 lakh acres in East Godavari and Visakhapatnam Districts, after completion of Polavaram Project and its Left Main Canal.

[HANDED OVER TO IRRIGATION CIRCLE, DOWLAISWARAM FROM I.S.L.M.C. CIRCLE, TUNI.] 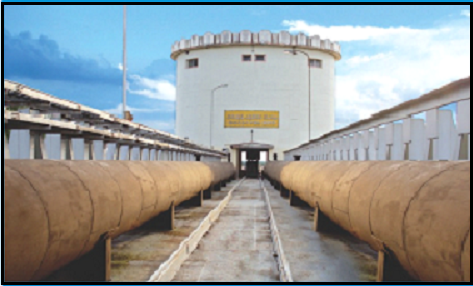 Location : Chagalnadu Lift Irrigation Scheme Pumps 232 Cusecs (6.56 Cumecs) of water over a static head of 47.40 m in three Stages form the river Godavari near Katheru (V), East Godavari District to provide irrigation facilities to 22,000 Acres during Khariff season and drinking water to a population of 1.02 lakhs people in 35 Villages of East Godavari District. 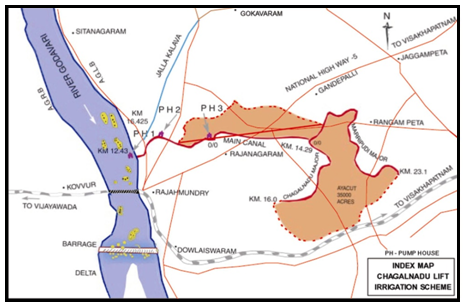 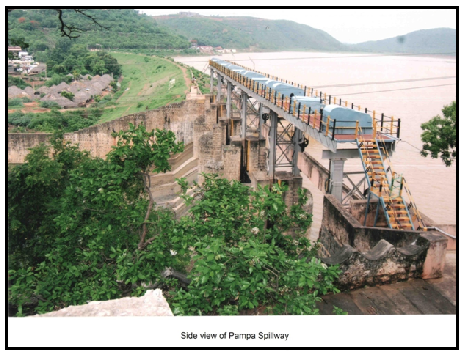 Pampa Reservoir Project was completed in the year 1969. Modernisation of canals is taken up to stabilize the ayacut of 12,005 acres under the project in 13 villages in Sankhavaram Mandal.

The Torrigedda Pumping Scheme is situated in between Km.41.400 to Km.41.600 of Akhanda Godavari Left Bank near Purushothapatnam Village in Seetanagaram Mandal of East Godavari District in Rajanagaram Assembly Constituency (2009). The longitude and latitude of the scheme are 81° 39' 30'' and 17° 16' 00''respectively vide S.I. Sheet No. 65 G/11. The source of water for this scheme is River Godavari which is a perennial river and as such there is no scarcity of water for pumping during Khariff season (July to November). The construction of the scheme was commenced in the year 1958 and completed during 1964. The scheme envisages lifting of water from River Godavari with a pumping head of 11.88 meters i.e. 39 ft to provide irrigation facility to an extent of 13,758 acres at 70 duty of 14 Villages in Seethanagaram Mandal.

The work of remodeling the pump house was commenced in the year 1999 with NABARD assistance to construction of pump house with 850 HP 3 vertical turbine pumps (2 working, 1 stand by) and funds from R.I.D.F-3 and completed in the year 2003. 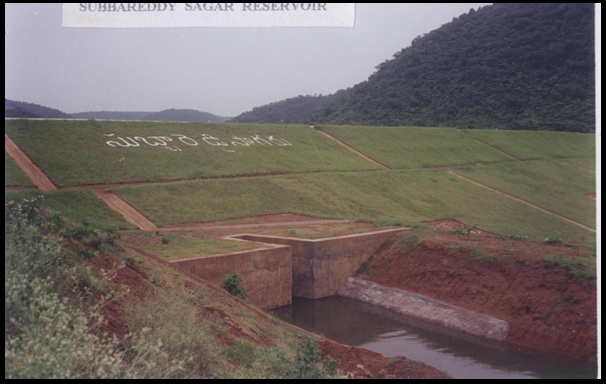 Subbareddy Sagar Project was constructed in the year 1969 across Kunthi Devi Vagu (Godavari Basin) near E.Gokavaram Village of Prathipadu Mandal, in East Godavari District which is situated 54 Km from Kakinada to irrigate a total ayacut of 9,900 acres benefiting Villages in Prathipadu Mandal.

The MWL of the reservoir and the heitht of the Project bund was rised steeply by 2.00 mts with NABARD assistance under RIDF-111 in the year 1998, due to the high floods observed during the year 1996. The Project commands the ayacut through 2 Head sluices for main canal i.e. Right Main Canal of ayacut 900 acres and Left Main Canal 8979 acres. 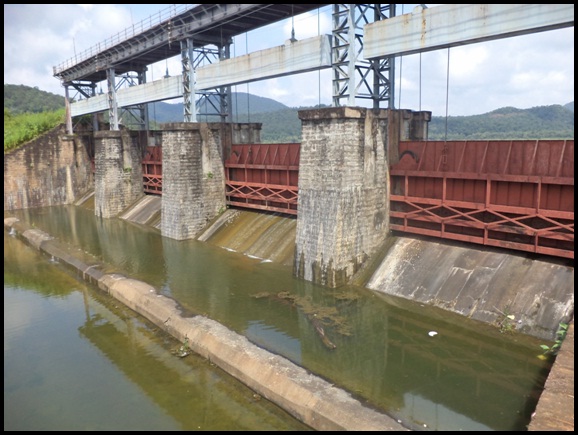 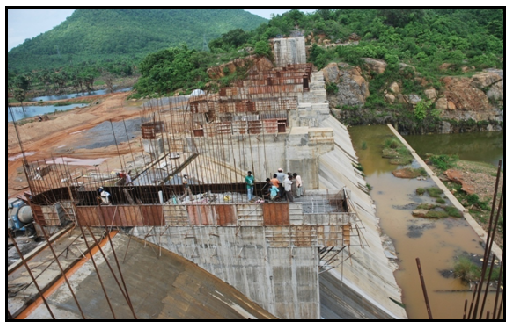 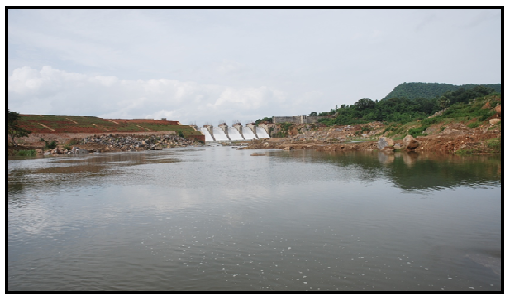 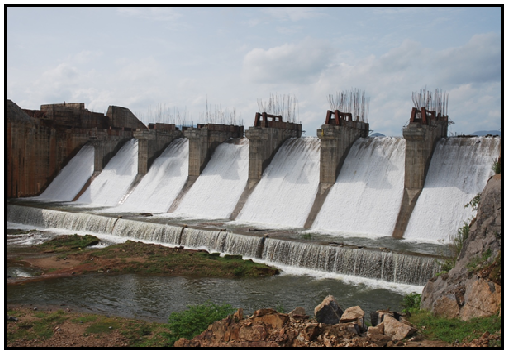 (Under The Control of Irrigation Circle, Dowlaiswaram) 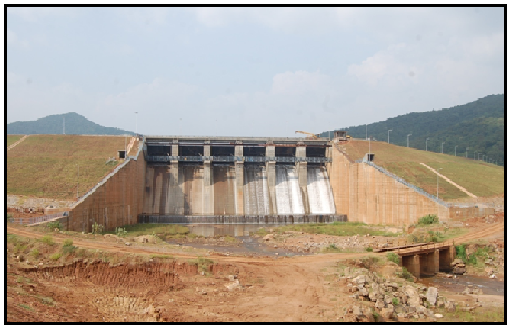 The Bhupathipalem Reservoir Project is a medium irrigation project constructed on Seethapalli Vagu, which is a hill stream and tributary to river Godavari near Bhupathipalem (V), Rampachodavaram (M) in East Godavari District. Total water utilization of the project is 1,151Mc.ft. The project is intended to provide irrigation facilities to an extent of 11,526 Acres of tribal ayacut covered in 32 villages of Rampachoadavaram & Gangavaram Mandals of East Godavari Districts and to provide drinking water to a enrouted 32 Villages population of 56,600. The Government have accorded Administrative Approval for Rs.187.91Crs vide G.O.Ms.No. 218, Dt.7-11-2007 and 185; Dt.31-10-2008. The project was completed in all respects. Necessary localization proposals was submitted to the District Collector,East Godavari District, Kakinada for Approval. 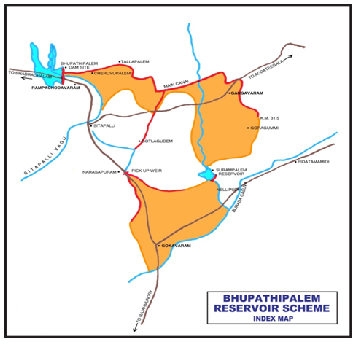 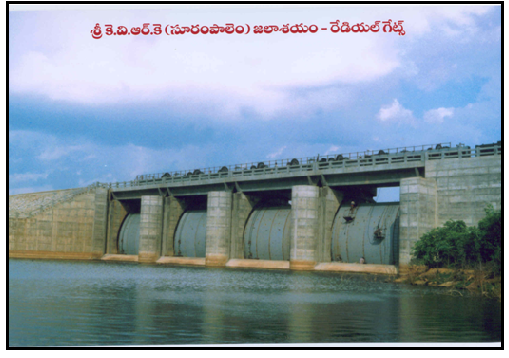 Sri K.V.Rama Krishna Surampalem Reservoir Project is a medium irrigation project constructed on Burada Kalva, which is a hill stream near Surampalem (V) in Agency Gangavaram Mandal of East Godavari District. Total water utilization of the project is 730Mc.ft. The revised cost of the project is Rs.69.74 Crores. It is intended to provide irrigation facilities to an extent of 11,560 Acres covered in 20 villages under Gokavaram, Agency Gangavaram and Korukonda Mandals of East Godavari Disrtrict and provide drinking water to enrooted 20 Villages for population of 42,800 at cost of Rs. 69.74 Crs.The Project is completed in all respects. Necessary localization proposals was submitted to the District Collector, East Godavari District, Kakinada for Approval. 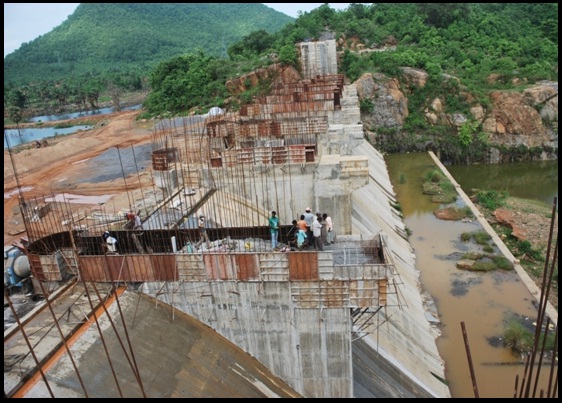 (Under the control of superintending engineer, i.s.l.m.c. Circle, tuni)

Musurumilli Reservoir Project is a Medium Irrigation Project proposed across Seethapallivagu near Musurumilli (v) of Rampachodavaram (M) in East Godavari District. The scheme is intended to create an irrigation facility to an extent of 9164 Hectares (22,643 Acres) besides drinking water facilities for 23 villages enroot the canal.Administrative approval of Musurumilli Reservoir Scheme was accorded by the Government of Andhra Pradesh vide G.O.Ms.No.204, dt. 31.12.2004 for Rs.207.00 Crores based on SSR 2004-05.

The Project is under progress. Execution of canals completed and 83% of Head works completed. The ayacut irrigated under the project is 22,316 Acres. Necessary localization proposals was submitted to the District Collector, East Godavari District, and Kakinada for Approval. 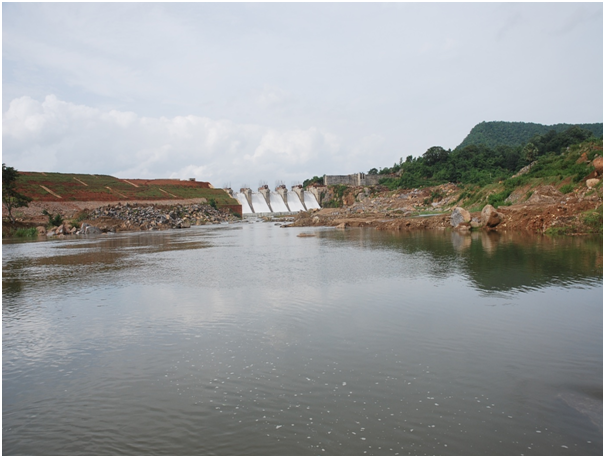 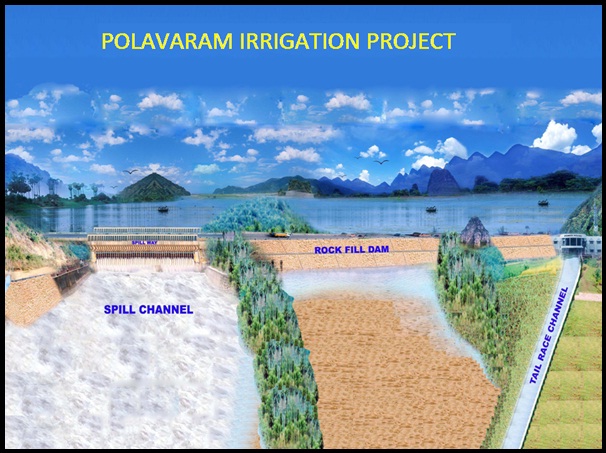 (Under the Control of SUPERINTENDING ENGINEER, I.S.L.M.C. Circle, TUNI)

The Polavaram Project is proposed across River Godavari near Ramayyapeta (V) of Polavaram Mandal, West Godavari District which is about 42 km u/s of existing SAC Barrage at Dowlaiswaram.

The Project envisages formation of a Reservoir across River Godavari with a live capacity of 75.200 TMC and two main canals one on the Right side and another on the left side to provide irrigation facilities to 7.21 lakh acres in East Godavari, Visakhapatnam, West Godavari and Krishna Districts. The objectives are:

ii) To divert 80.000 TMC of Godavari waters to Krishna Delta.

v) To supplement irrigated dry crops of about 16.00 lakh acres in the upland areas of Visakhapatnam,                      Vizianagaram, Srikakulam, West Godavari and Krishna districts under phase-II by lift.

vii)About 32 % of the total work completed.

viii)All the requisite clearances are obtained.

Salient Features of Polavaram Multipurpose Project (as per TAC of MoWR)

Diversion of 80 TMC of Godavari water into Krishna River above Prakasam Barrage. The water thus saved in Krishna basin will be shared in the proportion of 45 TMC for Andhra Pradesh and 35 TMC (21+14) for Karnataka and Maharashtra.

Benefits to other Basin States

Odisha and Chattisgarh can use in their territories 5 TMCft and 1.5 TMCft respectively by lifting from pondage of Polavaram Irrigation Project without bearing any cost of storage.

The Odisha and Chattisgarh can develop and export pisciculture and boating facilities in their own territories.

On account of diversion of 80TMC of Godavari water into Krishna River, above Prakasam barrage, equal extent of water in Krishna River will be saved.

80 TMC of water thus saved in river Krishna will be shared in proportion of 45 TMC for Andhra Pradesh, 35 TMC (21 TMC +14 TMC) for Karnataka & Maharashtra.

The Government of India, recognising the importance of the project, declared this project to be a National Project (Section-90 of A.P. Reorganisation Act,2014) and also declared that it is expedient in the public interest that the Union should take under its control the regulation and development of the Polavaram Irrigation Project for the purpose of irrigation. It also specified that the Central Government shall execute the project and obtain all requisite clearances including environmental, forest, and resettlement norms.

(under the control of engineer-in-chief, P.I project, dowlaiswaram) 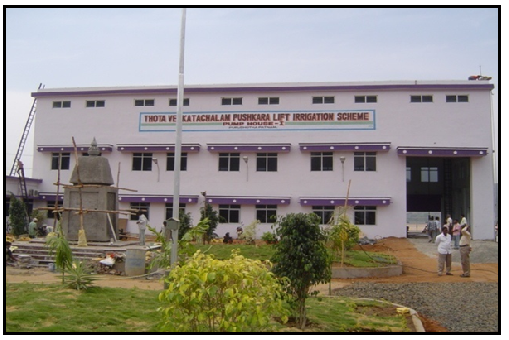 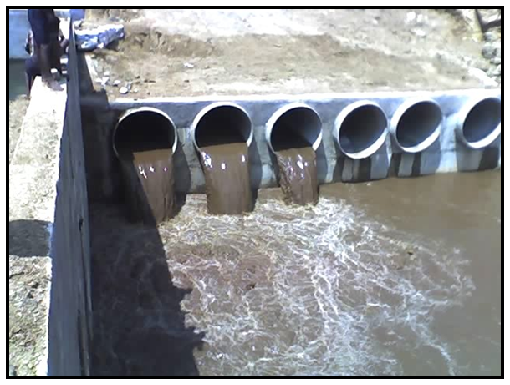 Thota Venkatachalam Pushkara Lift Irrigation Scheme contemplates pumping of 1505Cusecs (42.62 Cumecs) of water over a static head of 28.20 mt from river Godavari near Purushothapatnam (V) to provide irrigation facilities to an extent of 1.86Lakh acres during Khariff season and drinking water to 5.30 lakh people in 18 Mandals of East Godavari District at a cost of Rs.608.04 crores. The total power requirement is 33.272MW. 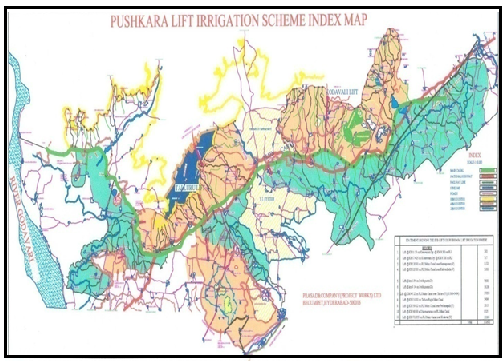 (UNDER THE CONTROL OF SUPERINTENDING ENGINEER, I.S.L.M.C. CIRCLE, TUNI) 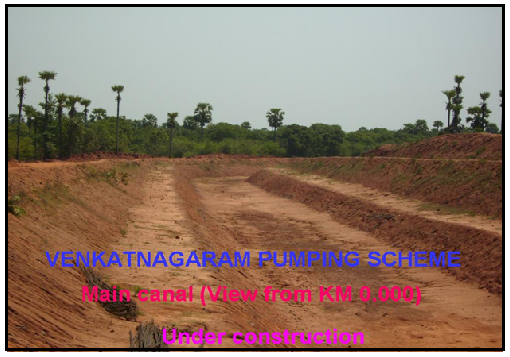 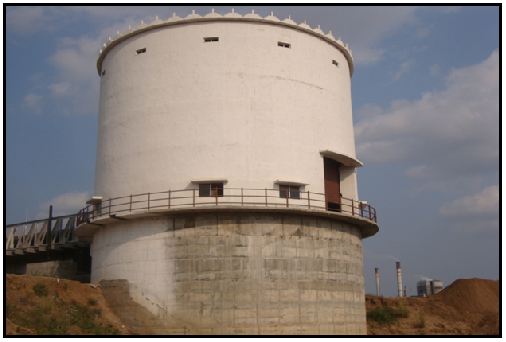 Renovation of existing Venkatanagaram Pumping Scheme located near Venkatanagaram village of Rajahmundry Rural Mandal in East Godavari District is intended to supply water to the existing ayacut of 4250 Acres (stabilization) and a new ayacut of 29,750 Acres by lifting water from River Godavari with three lifts. 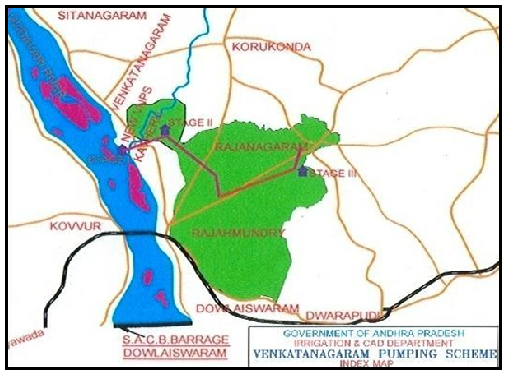 4. Statement showing the Allotment of water to Industries from U/s of Sir Arthur Cotton Barrage G.C.Canals

8. Statement showing the Allotment of water to Drinking purpose in East Godavari District Upstream side of Sir Arthur Cotton Barrage

10. Statement showing the Abrstact Report for Allotment of water to Drinking purpose in East Godavari District

11. Statement Showing Status Of Water Levels/Capacity In Mi-Tanks & The Possible Source Of Reservoir From Where The Tank Can Be Fed Of Godavari Central Division, Dowlaiswaram.

13. Statement Showing the Status of Water Level / Capacity in M.I.Tanks and The Posibble source / Reservoir in Special M.I. Division, Rampachodavaram.

14. Statement showing status of Water levels/Capacity of MI tanks & the possible source / Reservoir from where the tank can be

Note : Out of 498 PR tanks 228 tanks particulars are furnished, balance 270 PR tank particular to be finalized, for which work is enstruted to M/s. Kuldeep Consultency and agreement to be concluded