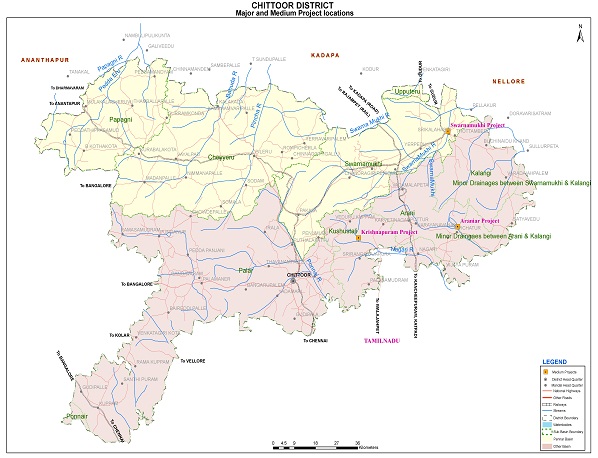 Chittoor District is situated in South Eastern part of Andhra Pradesh in Rayalaseema Region. The District is located in Geographic coordinates of 12° 37' to 14° 08' of North latitude and 78° 33' to 79° 55' of the Eastern Longitude. The population of the District is 41,70,468 (2011 census).The District is surrounded by Nellore, Kadapa, Ananthapur Districts and bordered by Tamilnadu and Karnataka States. There are 8 main River basins in the District Viz: Swarnamukhi, Kalangi, Arani, Kushastali, Palar (including Koundinya, Bheema, chittoor&Ponniar), Cheyyeru, Papagni and Upputeru (Major basin Pennar). The Diatrict principally depends upon Agriculture. The principal crops are Paddy, Sugarcane and Ground nut.

The District headquarter is connected by Broad-Gauge Railway line from Secunderabad, Hyderabad, Vijayawada, Bangalore. The famous temple of Lord Sri VenkateswaraSwamy of Tirumala and the temple city Tirupati lies in the District. The Tirupati city is connected all over the country by Railways, Airways and Roadways. The area of the District is covered under Major Irrigation, Medium Irrigation and Minor Irrigation Sources. The Major Irrigation projects are NTR-Telugu Ganga Project (NTR-TGP), Handri Neeva Sujala Sravanthi (H.N.S.S) and Galeru Nagari Sujala Sravanthi (G.N.S.S).

There are 3 No. of completed Medium Irrigation Projects in the District Viz: Swarnamukhi Anicut System, Araniar and Krishnapuram with total ayacut of 21,875 Acres. There are 668Nos of Minor Irrigation Sources (more than 100 acres )with an ayacut of 1,69,218 Acres, including 5 Nos of Medium projects transferred as Minor Projects as their ayacut is less than 5000 Acres. In addition there are 7395Nos ofMinor Irrigation Sources (less than 100 acres) with an ayacut of 1,36,618Acres. 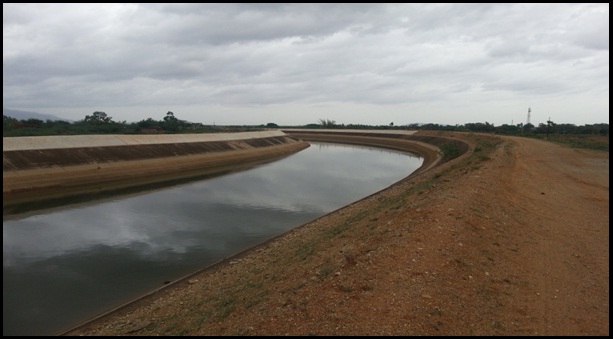 SatyaSai Ganga Canal ( K.P.Canal ) runs for a length of 151.887 Kms from Kandaleru Reservoir upto Andhra Pradesh / Tamilnadu border to irrigate 3,00,000 Acres in Nellore and Chittoor Districts in addition to supply of 15 TMC of drinking water to Chennai city. The canal takes off from the Right side of Kandaleru Reservoir with sill level at +60.000 M and with a head discharge of 113.27 cumecs (4000 Cusecs). The ayacut of 3,00,000 Acres under SatyaSai Ganga Canal is distributed through 1 to 9 Branch Canals in Nellore and Chittoor Districts. The T.G.P & GNSS. Circle, Srikalahasti is entrusted the C.C. lining works in the balance reaches of S.S.G.Canal from Km.0.000 to Km.151.887 and also execution of 6th to 9th Branch Canals & their distributory systems to provide irrigation facilities to a contemplated Ayacut of 1,45,000 (Nellore :90674 Acres, Chittor:54326 Acres)

Excavation of the entire length of SatyaSai Ganga Canal (the then K.P.Canal) was completed, including construction of structures.C.C. Lining for Canal Bed and Sides was done at most vulnerable reaches by the Department and by Sri SatyaSai Charitable Trust.

Before Jalayagnam, against the contemplated Ayacut of 17,352 Acres under the distributariesof 7th Branch Canal (except 13L, 14R, 15L majors), 7A, 7B, 8A-1R Branch Canals, Ayacut to an extent of 17,664Acs is identified and 16,003Acs of Ayacut was developed. Action is being initiated to develop balance Ayacut of 1349 Acres.

c) To create an irrigation potential of 69,548Acres. 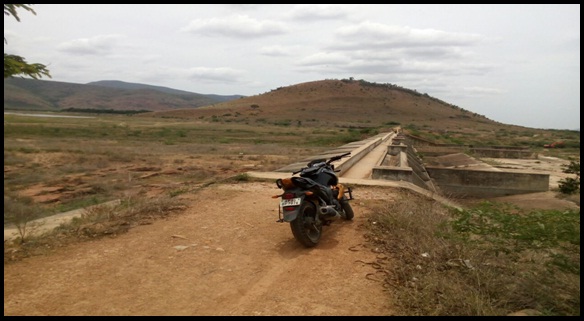 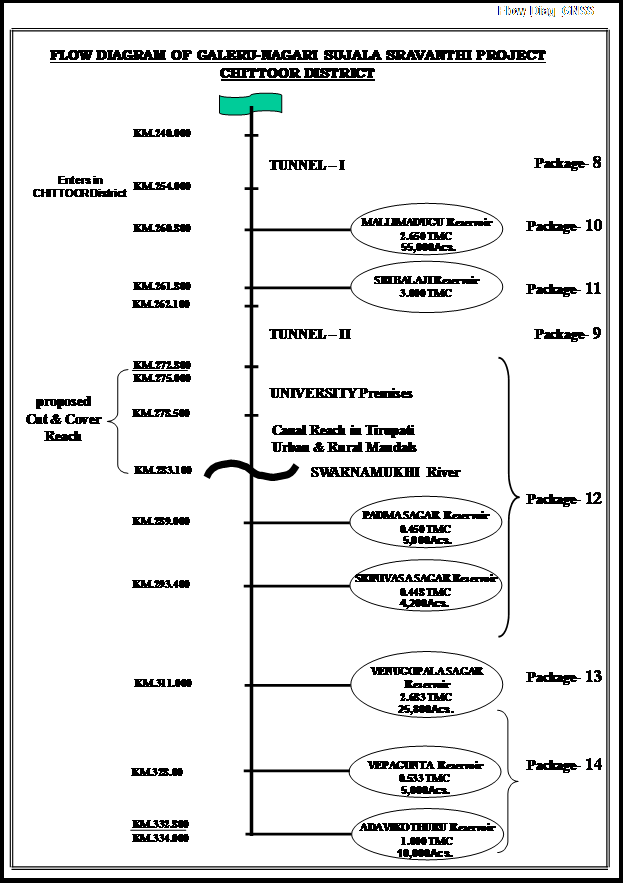 The Galeru Nagari Sujala Sravanthi Project was conceived by the Govt. of Andhra Pradesh in G.O.Ms.No.236, dt:22-9-88 to take up GNSS. Project. The Project is envisaged to provide Irrigation facilities to an extent of 2,60,000Acres (1,55,000Acres in Kadapa Dist., 1,03,500Acres in Chittoor Dist. And 1,500Acres in Nellore Dist.) and also to provide drinking water facilities to 5,00,000 people. It also envisages drawal of 38TMC flood water of Krishna River from the foreshore of Srisailam Reservoir during the period from August to November.

In view of the large magnitude of the project and to derive early benefits, the project was taken up in two phases.

2) I. Sri Balaji Reservoir (3 TMC, 1TMC for Drinking water to Tirupathi& 2 TMC for Irrgn. To     Mallimadugu Reservoir) & its distributories. 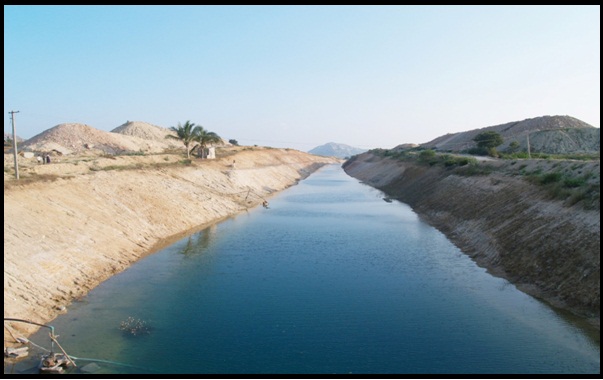 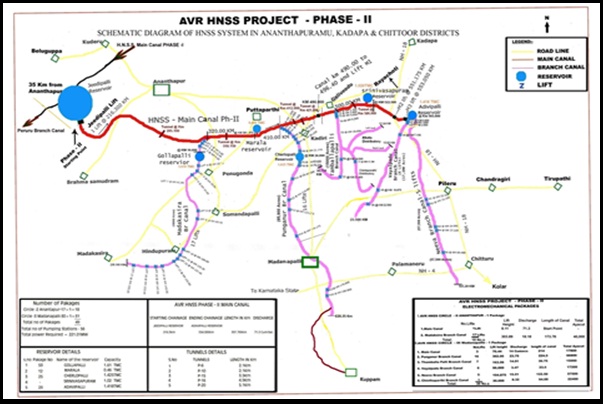 The Handri Neeva Sujala Sravanthi Project proposes to utilize 40.0 TMC of Krishna river water by lifting at 12 suitable locations enroute the main canal for providing irrigation benefits to an Ayacut of about 6,02,500 acres (2.438 Lakhs hectares) Khariff I.D and drinking water facilities enroute in the up land and drought prone areas of Kurnool, Anantapur, Kadapa and Chittoor Districts to 33 Lakhs people (both HNSS Phase I & Phase II).

To provide irrigation benefit to an Ayacut of about 3,98,300 acres in HNSS Project, Phase II out of which 1,81,400 acres Khariff I.D and drinking water facilities to 10 Lakh Population in Chittoor District. 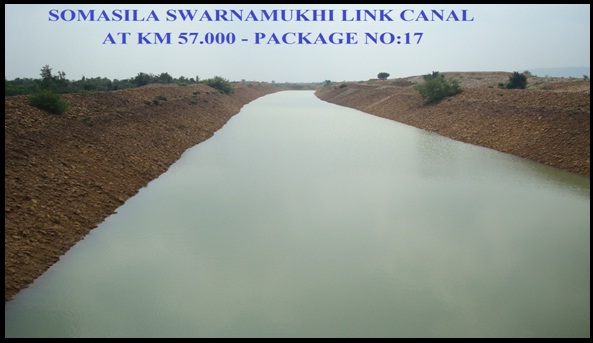 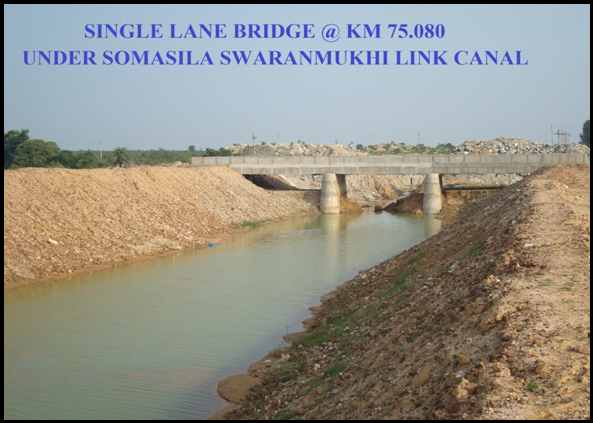 The Somasila Swarnamukhi Link Canal takes off At Km 12.520 of Somasila Kandaleru Flood Flow Canal which is component of Telugu Ganga Project and runs for a length of 100.425kms, with a carrying capacity of 2500 c/s at head and with starting F.S.L. of +93.580M.

This canal is intended to provide irrigation facilities to the high level layout situated on Right Side of K.P. Canal. There are 316 M.I. Tanks in Nellore and Chittoor Districts with contemplated ayacut of 1.10Lakh Acres which is not commendable by K.P. Canal. Somasila Swarnmukhi Link Canal is intended to stabilize 1.10Lakh Acres under 316 MI tanks and also providing drinking water facility to 2.50Lakh population in en-routing Mandals (0.20 TMC) by diverting 4.45TMC of Pennar Flood Waters.

Benefits of the project:

The inletted water is proposed to be utilized for the drinking water needs of Tirupathi city and Renugunta, Yerpadu and Srikalahasti towns and en-routed villages by storing this water in proposed 1.018TMC balancing reservoir near Althurpadu village and also in Thondamanadu and Uranduru MI tanks by the increasing the capacities by another 600Mcft and 300Mcft respectively.

To provide irrigation benefit to an Ayacut of about 97,000 Ac under Somasila Swarnmukhi Link Canal and drinking water facilities to 2.5 Lakh Population of 0.20 TMC.

(A) Ayacut both Stabilization of Tanks & Direct Ayacut :

Out of total length of 100.425kms, the canal traverses in non-forest lands for a length of about 58.958 kms. The total requirement of Non forest lands are as follows.

Swarnamukhi originates from Nallamalai ghats in Chandragiri (M) and runs through Chandragiri, tirupathi, Renigunta, Yerpedu and Srikalahasthi in Chittoor District. Swarnamukhi anicut system was constructed in the year 1956 at a cost of Rs 1932.00 lakhs.

The anicut has a main canal (Chembedu canal from head regulator) for a length of 15.4 km, covering 8.40km in Srikalahasthi and Thottambedu mandals and 7.00km in Nellore District. There is no left canal to this anicut. The project was constructed for providing irrigation facilities to an extent of 10,200 Acres duly feeding 46 tanks in 25villages of Buchinaidu kandriga, Thottambedu of Chittoor District and Pellakur mandal of Nellore district. 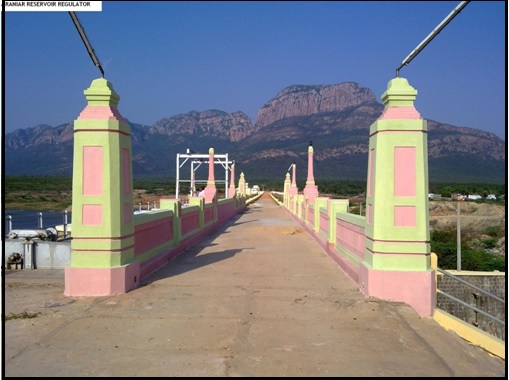 The Araniar Project was constructed across Araniar river in the year 1958.The Project is feeding to an ayacut of 5500 acres in Kharif and 3600 acres in Rabi season .The ayacut is classified as (a) Direct ayacut of 3400 acres (b) supplementation of 2100 acres under 10 system tanks.Thisayacut is spreading in Pichatur and Nagalapuram mandals of Sathyavedu constituency. The capacity of the reservoir is 1853 Mcft.

The capacity of the reservoir is 1853 Mcft at F.R.L of 281 feet.The total length of tank bund is 3.60 KM .The reservoir has three head sluices with different sill levels for delivering the discharge to the ayacut. The M.F.D of 30500 cusecs will be discharged through the newly constructed spill way with four vents of size 10.0 m X 5.50 m and through a natural bye wash located on extreme left flank of the reservoir.This spill way is intended to discharge the flood water.All the Radial gates are operable both with power and generator.A diesel generator with 50 kva capacity is also installed. Sufficient lighting arrangements are made at the site of new spill way for operation during night time. 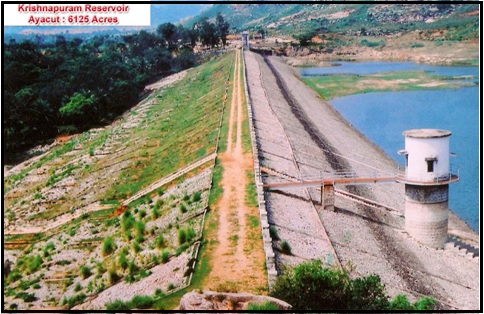 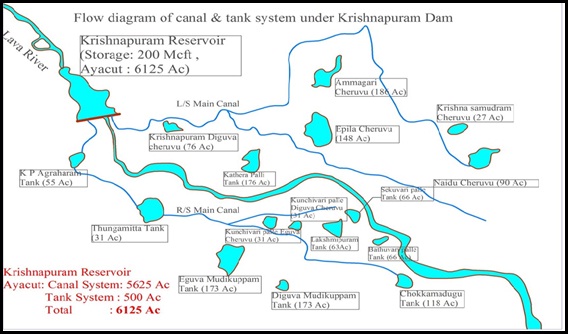 The Krishnapuram Project was Constructed across LAVA River near Krishnapuram Village in Karvetinagaram Mandal of Chittoor District in 1981 to provide Irrigation facilities to the ayacut to an extent of 6125 Acres.

Two Irrigation Canals i.e., left main canal of 7.00 KM in length and right side canal of length 3.23 KM were excavated and lined for providing irrigation facilities to the ayacut through the system tanks and also through the channels in direct pertaining to the villages both in Karvetinagar & S.R. Puram mandals of Chittoor District.

It is very much essential to Modernize entire canal system duly providing cc side walls with bed lining to the canals and carrying restoration works to the CM & CD Works under this project. Proposals (Estimates) costing about Rs. 275.00 Lakhs for modernization of project and canal system were submitted and works of Worth Rs. 70 Lakhs are executed with estimate rates of 2006-07 SSR. As funds are not released regularly, the works have been stopped midway in incomplete state.

At Present an ayacut of 1500 Acres is only irrigated by the waters of Krishnapuram Reservoir as against the 6125 Acres because the Canal distribution is in dilapidated state. By reinstating the canal and distributory system including system tanks. 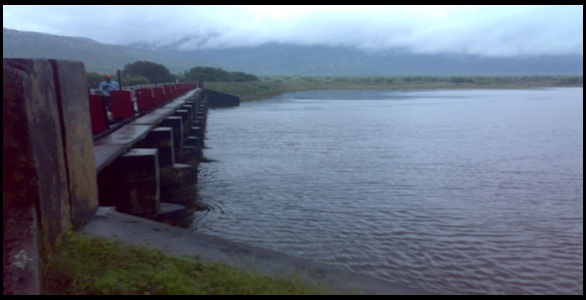 Kalangi Reservoir is constructed a/c Kalangi River located one and half KM South of Adaram (v) in K.V.B.Puram Mandal. The Global Coordinates of the Project one Longitude 79° - 48' and Latitude 13°  36' and is accessible by road from Srikalahasti. The reservoir is formed abutting the existing hill range on right side and joining the Ponnagunta and Panacheruvu tank bunds of Kandluru (v) on left side. 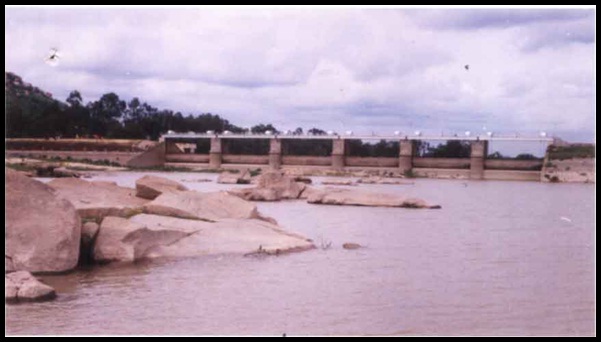 The project was originally takenup for construction in 1946 with an estimated cost of Rs 27.59 lakhs to benefit an ayacut of 1166 Ha.The project was completed during 1974 at a cost of Rs 63.32 Lakhs. The live capacity of reservoir is 398 Mcft.The water conveyance system comprises of two head sluices for teo main canals, 01 branch canal to left main canal, 03 main anicuts and 06 pickup anicuts across the river and 29 spring channels taking of from the river course 09 tanks are fed through supply channels taking of from this anicut. 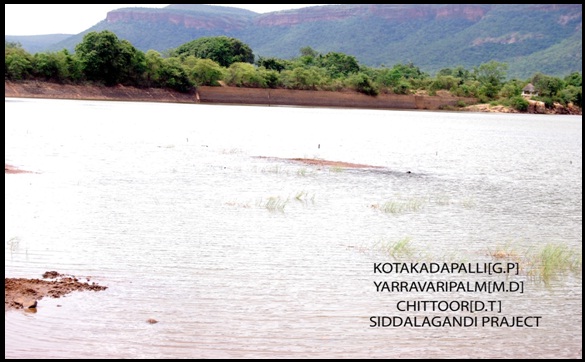 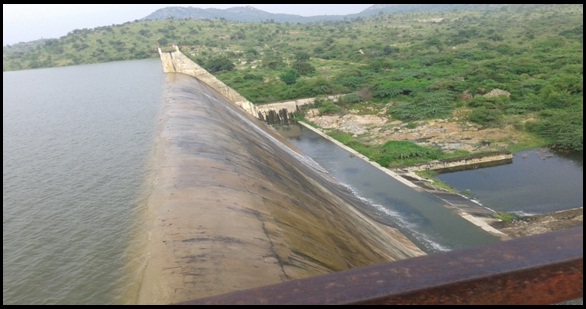 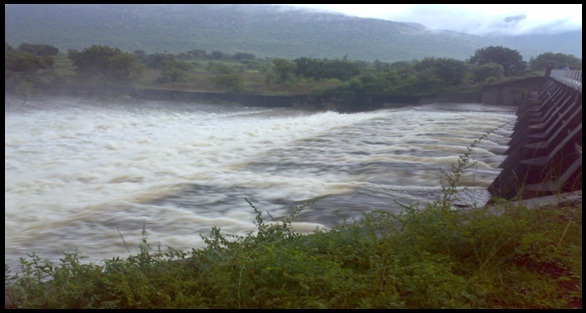 Pedderu Reservoir is constructed across river pedderu,a tributary to river Papagni in Pennar basin.Most of the beneficiaries under the project are tribal families. Under stage I,Pedderu reservoir had been constructed to irrigate 4300 acres in Rabi season only. 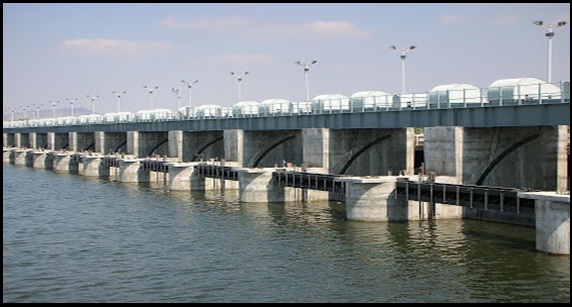 NTR Jalasayam (Kalvakunta Barriage) is located about 10km North to Chittoor town. The scheme is intended for utilizing a yield of 180 Mcft of water for drinking purpose to Chittoor town. The work was commenced during January 2002 and completed by March 2005.Capacity of the reservoir 109.17 Mcft.

The Sadasivakona Reservoir was formed across Sadadivakona vagu near Chellur (V) in Yerpedu (M) of Chittoor district.The reservoir is situated about 4Km towards South-East of Chellur (V) which is at a distance of 30Km from Tirupathi town.

The Kalyani Dam was constructed across the River Kalyani near Rangampeta village in Chandragiri mandal. A main source of water supply for Tirupati and Tirumala, this dam is located around 23 kilometres from Tirupati.

The scheme is intended for supplying water to Tirupathimunicipality and TTD of Chittoor District.

The maintenance cost of both Irrigation and Public Health portion are to be borne by the T.T.D and tirupatiMuncipality in 1:2 ratio.Ever since completion, the project is being maintained by the Irrigation Department with the financial assistance from both the organizations.