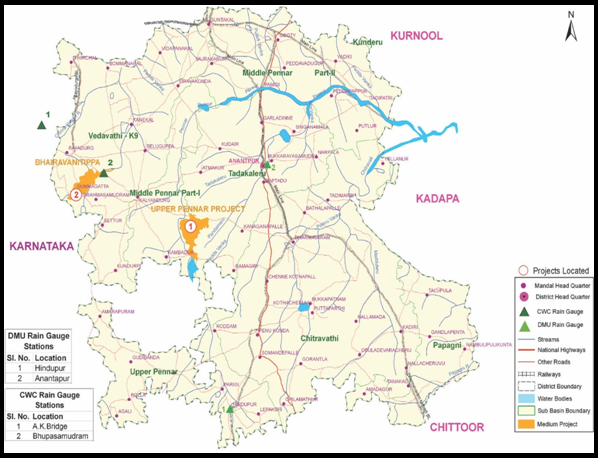 Ananthapuramu District is situated in Rayalseema region of Andhra Pradesh state and lies between 13°-40'N to 15°-15'N Latitude and 76°-50'E to 78°-30'E Longitude with a population of 40,83,315 (2011 census). One of the famous spiritual center in this district is Puttaparthi and it is 80Km. away from Ananthapuramu. The District falls partly in Krishna basin and partly in Pennar basin. The District is surrounded by Bellary, Kurnool Districts on the North, Kadapa and Kolar Districts of Karnataka on South East and North respectively. The district is principally a hot country and temperatures vary from 17°C-40°C. The important rivers flowing in the District are (1) Pennar (2) Jayamangali (3) Chitravathi (4) Vedavathi (also called Hagari), (5) Papagni, (6) Maddileru.

The district head quarter is connected by S.C. Railways broad gauge railway line from Secunderabad, Guntakal, Bangalore and Bellary (Via) Guntakal to Pakala.

Most of the area in this District is covered under Minor Irrigation Sources only in addition to one completed Major Irrigation Project viz., Tungabhadra Project High level canal (TBP HLC) system stage-I (A joint venture of Karnataka and Andhra Pradesh States). The Right Bank High level canal (R.B.H.L.C.) takes off from right bank of T.B. Dam and runs in Karnataka and enters in Andhra Pradesh at Km. 105.437 and contemplated to irrigate an ayacut of 2.849 Lakh acres out of this 1,45,236 acres in Ananthapuramu district and remaining is Kurnool and Kadapa District. The T.B.P.H.L.C. Stage-II scheme, which is an Ongoing Project has been taken up during 1967 with a cost of Rs 914.70 Lakhs to provide irrigation facilities to an extent of 2,83,041 acres (including 1,01,600 acres under PABR Stage-II, i.e., Yadiki Canal System) in Ananthapuramu, Kadapa and Kurnool districts. Out of the total ayacut of 2,83,041 acres ayacut contemplated under T.B.P.H.L.C. Stage-II scheme, an ayacut of 1,33,807 acres is situated in Ananthapuramu district. Thus the total Ayacut contemplated in Ananthapuramu district under TBP HLC Scheme (Stage-I and II) is 2, 34,177 acres.

The classification of total area of the District is as follows:


The T.B.P.H.L.C. scheme is a joint venture of Karnataka and Andhra Pradesh states. The Right Bank High Level Canal (R.B.H.L.C) takes off from Right bank of T.B. Dam and runs in Karnataka and enters in Andhra Pradesh at Km 105.437 and contemplated to irrigate an ayacut of 2.849 Lakhs Acres out of this 1,45,236 Acres are in Ananthapuramu District and the remaining is Kurnool and Kadapa Districts.

The distribution of 21.73 T.M.Cft. of water within Ananthapuramu District for T.B.P.H.L.C. System is as given below.

The scheme has been taken up in the following two stages.

The T.B.P.H.L.C. Scheme Stage-I has been taken up in the year 1960 and completed by 1966 with a cost of Rs.11.74 Crores creating an Irrigation Potential of 1,07,516 in Ananthapuramu District The T.B.P HLC consists of the following Components.

The T.B.P.H.L.C. Scheme Stage-II has been taken up during 1967 contemplating an irrigation potential to an extent of 32,063 acres in Ananthapuramu District.

The T.B.P.H.L.C. Scheme Stage-II consists of the following components with in the District.

Out of the above works, item No. 1 and 2 are completed. Item No. 3 to 5 are almost completed except distributory and No. 6 is in Progress under EPC turn key system.

The details of the completed and ongoing components of the system are as follows.

The High Level Main Canal (H.L.M.C) enters in to Andhra Pradesh at Km. 105.437 near Bommanahal (v), Ananthapuramu District and terminates in to a vanka which leads to Mid Pennar Reservoir.

In addition to 32.50 T.Mcft of Tungabhadra water allocated by the KWDT, a quantity of 10 T.Mcft of water is also allocated by the Government of Andhra Pradesh to PABR for catering the drinking requirement and other incidental needs of the District, vide G.O. Ms. No. 3 Irrigation & CAD (P.W..MAJ.Irr.VI) Department, Dated: 04.01.2006. In order to draw 42.50 T.Mcft (32.50 + 10.00) of Tungabhadra water, the High Level Main Canal (HLMC) is to be widened to carry a discharge of 4200 cusecs at A.P. Border as suggested by the Committee of Experts. 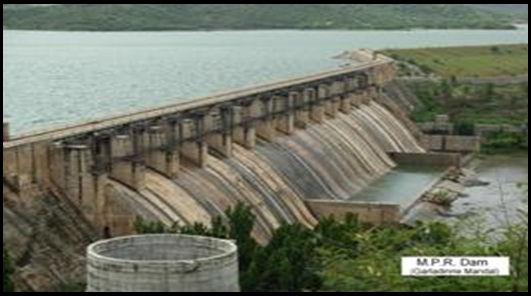 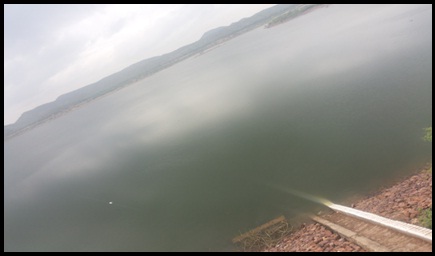 Subbaraya Sagar Balancing Reservoir (S.S.B.R) has been constructed across local vagu near Kadavakallu (v), Tadipatri Mandal, Ananthapuramu District. Subbaraya Sagar Balancing Reservoir is a percolating tank which exits at the tail end of Mid Pennar South Canal with a capacity of 0.42 TMC. This reservoir feeds water to 29th distributory of Mid Pennar South Canal and to Tadipatri Branch Canal. 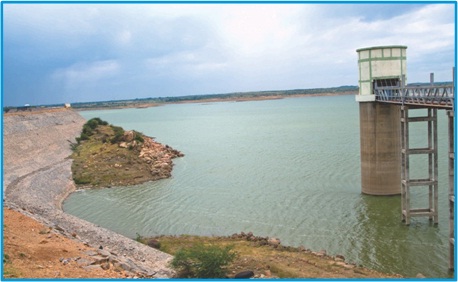 It is intended to provide irrigation facilities to 1.01 lakh acres (50,000 Acres under P.A.B.R. Right Canal in addition to stabilization of ayacut 7,500 acres under tanks enroute and 51,600 Acres under Yadiki Canal System).

Dam : All the Dam works are almost completed except erecting of Gantry Crane and certain rehabilitation works (Drilling and Grouting to prevent leakages). An amount of Rs. 13.50 Crores is necessary to complete the above works.

The PABR Right Canal has been taken up in 1978 to provide irrigation facilities to an extent of 50,000 Acres to serve in Kuderu, Singanamala, Anantapur, Raptadu, Dharmavaram and Tadimarri Mandals of Ananthapuramu District in addition to stabilization of ayacut of 7,500 acres under tanks enroute.

Contemplates irrigation facilities to an extent of 5000 acres to serve 7 mandals in Ananthapuramu district in addition to stabilization of ayacut of 7500 acres under M.I tanks.

The works are almost completed except distributory network. It is estimated that Rs. 20.00 Crores is necessary for physical completion of all balance works to provide contemplated benefits.

Yadiki Canal system is intended to provide Irrigation facilities to an ayacut of 50,000 acres I.D. during Rabi season by utilising 5 TMCft of water to be stored in P.A.B.R. to benefit arid areas of Yadiki, Peddavadugur, Peddapappuru and Tadipatri Mandals of Ananthapuramu district. 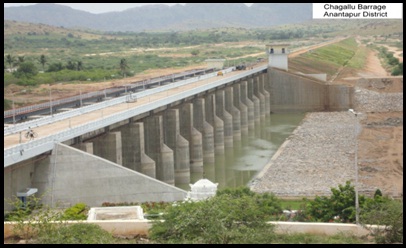 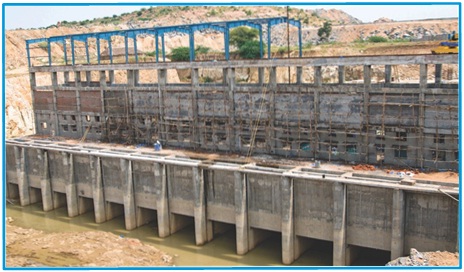 The Anantha Venkata Rami H.N.S.S. Project is conceived to provide irrigation facilities to 6.025 Lakh acres (Khariff ID) in the four districts of Rayalaseema and supply of drinking water to about 33 Lakh People, utilizing 40 TMC of flood water from the Krishna River. This flood water is to be drawn from the foreshore of Srisailam reservoir with an approach channel of 3.4 Kms length and the Main canal runs for a length of 565 Kms. Water is to be drawn during the 120 flood days from August to November. This scheme involves lifting of water in 8 stages in Phase-I Main Canal and 4 stages on Phase-II main canal with a total lift height of 369.83m, excavation of 5 Nos. of tunnels for a total length of 13.05 Kms and formation of 8 balancing reservoirs enroute.

The water utilization proposed under the project is as follows:-

The Ayacut proposal under Four Districts is as follows:

HNSS Project Phase-I, starts near Malyala(v), Nandikotkur(m), Kurnool District and contemplates lifting 14 TMC of water from Krishna river in 9 lifts (including Muchchumarri Lift ) ranging from 24 to 31.20m height, including construction of 3 reservoirs on main canal, and to convey them through HNSS canal of 216.00 Kms length connecting to the pump houses, to provide irrigation facilities to 1.98 lakh acres in Kurnool and Ananthapuramu Districts besides providing drinking water to a population of 10 lakh in 144 villages. One Branch canal i.e., Peruru Branch Canal (80,600 Acres) with 3 lifts is included in Phase-I. Ayacut proposed under HNSS Phase-I is 1,98,000 acres

The work of Phase-I are taken up under EPC turnkey system in 23 Packages (Civil works) and the main canal works from Km.(-) 3.40 to Km.216.300 i.e., up to Jeedipalli Reservoir were completed and distributory works are in progress. The works of Mechanical package works (lifts) are at completion stage.

The Phase-II of the project involves

The 5 Reservoirs are proposed in Phase-II as follows 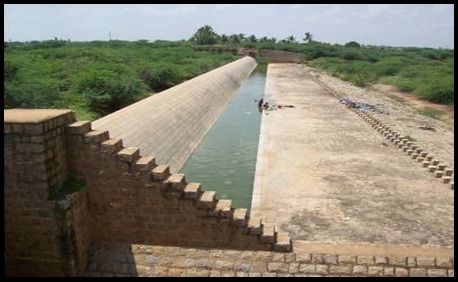 This is a diversion scheme constructed across Pennar River 0.80 Kms down stream of confluence of the Pennar and Kumudvathi Rivers.This Project envisages supplementation of water to 7 tanks enroute both Left & Right side canals of the project and it was constructed during the year 1948 - 1956 across Pennar River half a mile below the confluence of the Pennar and Kumudvathi River.

This project envisages supplementation of water to 7 tanks enroute both on left and right side canals of the project. 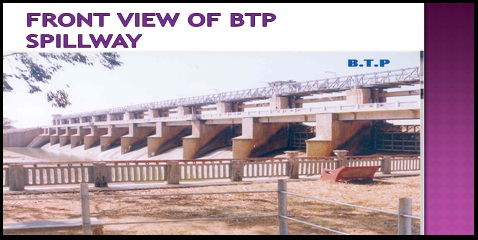 This project is located in Gummagatta Mandal near border of Karnataka and Andhra Pradesh states, across Vedavathi River (also called Pedda Hagari River) in Krishna basin and it was constructed across River Hagari during 1955 to 1961 with a designed localization pattern of 12,000 Acres in both left and right flank main canals. 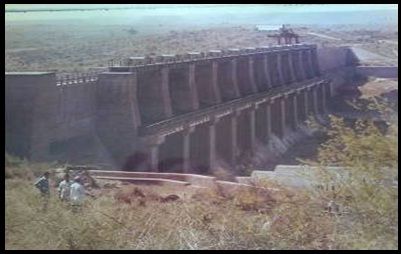 This tank is being constructed across Jilledubanda vagu which is a tributary to Maddileru river and is located in Pennar basin. The total cost is Rs.1146.01 Lakhs including LA for head works. The head works is taken up at a cost of Rs. 598 Lakhs for head works during 7/2004.

The Ground Water Department is Carrying out integrated Hydrogeological & Geophysical surveys for selection of different wells both for irrigation as well as Drinking water for District Agencies such as Scheduled Caste Corporation, BC Corporation, DRDA, DWMA, APSCRIC, PR, MI, RWS Departments and Private Parties on their request. In addition to this the Department is carrying out of Surveys for the selection of sites for construction of Artificial Recharge Structures like check dams/Percolation tanks.

Ground Water resource available, Utilization and stage of utilization based on Groundwater estimation in 2010(Base Year 2010-11)

The stage of Groundwater development (Utilization) is 79% and categorized as semi critical.

Ground Water Department is monitoring the changes in ground water regime continuously through a network of OB Wells from June-1974 and piezometers from 1997. Total 73 piezometers were constructed in the District. The piezometric Groundwater levels of the district are monitored through automatic water level recorders and manual and the fluctuations noticed seasonally and annually are analysed in relation to rainfall, recharge measures, drought and extraction of ground water in the area. The water level data collected in the month of August-2014 is analysed and compared with earlier periods for studying the seasonal and annual fluctuations in water level in relation to rainfall continuously.

Rainfall is the principal source of ground water recharge. The behaviour of ground water table is essentially governed by rainfall, it's quantity, intensity, duration and frequency.

Water levels in the range of 2 to 5m.bgl are prevailed in 2 of the piezometers monitored during August-2014 where as 2 piezometers fall in this range in August-13.

Water level in the range of 5m to 10m. bgl. are noticed in 8 of the piezometers monitored during August-2014where as 9 piezometers fall in this range August-13.

Moderate depth to water level in the range of 10 to 20m.bgl. is observed in 19 of piezometers monitored during August-2014, where as 18 piezometers fall in this range in August-13.

Deeper water levels in the range of 20-30 m bgl are recorded in 21 of piezometers monitored during August-2014, where as 21 piezometers fall in this range in August-13 in the district.

Deepest water levels of more than 30 m bgl are recorded in 7 piezometers monitored during August-2014 where as 7 piezometer falls in this range in August-13. 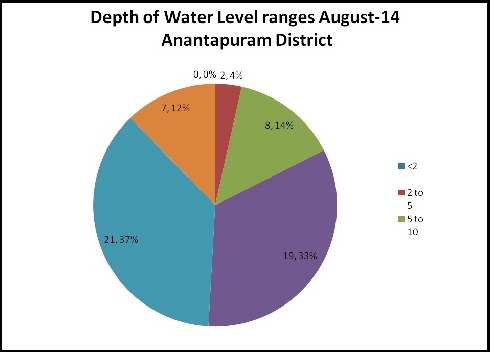 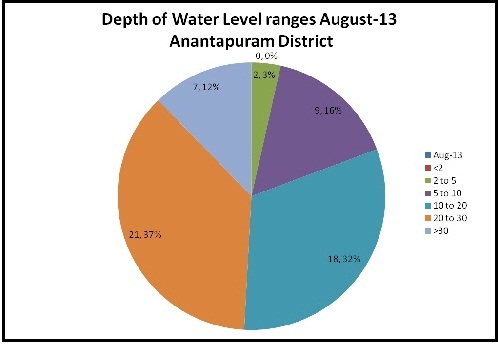 Zoning of areas as per depth to ground water table: (August-2014)

The Study of depth to water level of August-2014 indicates deep water levels more than 20m. are observed in major parts of Kalyanadurgam, Penukonda, Anantapuramu,Kadiri Divisions.

Zones of moderate ground water levels of 10 to 20m deep are noticed in most parts of, Kalyanadurgam Kadiri, Anantapuramu, Penukonda, Divisions.

Water levels zones of 5 to 10m. are observed in most parts of Kalyanadurgam division , Darmavaram, Anantapuramu Divisions.

Shallow ground water levels less than 5m are observed in some parts of Ananthapuramu, Division.

Ground Water resource available, Utilization and stage of utilization based on Groundwater estimation in 2010(Base Year 2010-11):

The stage of Groundwater development (Utilization) is 79% and categorized as semi critical.

In this situation the need of the hour is 1) To harvest the rainfall run-off and recharge the groundwater body and 2) Judicial use/Efficient use of Groundwater in water stressed areas i.e., Over exploited (OE), Critical, Semi Critical areas to mitigate the drought situation effectively.

a) Renovation of existing water bodies to restore the original storage capacity by I & CAD and DWMA.

b) Tank desilting by Water Resources Department, DWMA under MGNREGS.

2) Judicial use/Efficient use of Groundwater:-

a)Change in cropping pattern as suggested by Agriculture and Horticulture Department.

b) Micro Irrigation methods by APMIP.