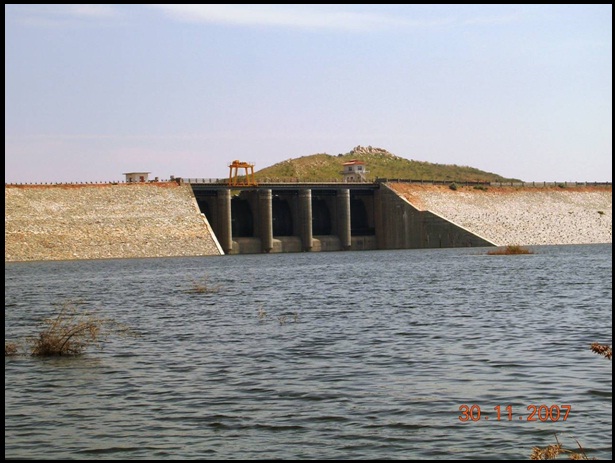 Originally, the preliminaries of the project were taken up during 1995 But the main works were taken up during 2003 with meager funds from 2004 onwards sufficient funds were made available and project was taken up under Jalayagnam programme on priority basis with normal state plan funds. During 2006, the project was projected under AIBP (Prime ministers Package ) with 90% central assistance and 10% state share. The expenditure incurred under state plan funds upto 3/2006 is Rs.120.106 crores and in AIBP from 4/06 to 3/2012 is cumulative expenditure so far is Rs. 186.06 crores.

The project was completed and inaugurated by the then Hon'Âble Chief Minister, Government of Andhra Pradesh on 22.12.2008.and water was released to the canal.

The main components of works under this project are

a) Formation of Earth Bund: Formation of earth bund was taken up during 2003 with an estimated cost of Rs. 1749.00 lakhs and the work is completed in all respects. The total expenditure incurred on this item of work is Rs. 1622.39 lakhs.

b) Construction of Spillway: Construction of spillway excluding erection of radial gates was taken up during 2004 with an estimated cost of Rs. 4745.00 lakhs and the work is completed in all respects. The total expenditure incurred for this item of work is Rs. 4706.81 lakhs.

(b) Extension of Right Main Canal to feed two Tanks (L.S. Contract) Government has accorded administrative approval for Rs. 309.00 lakhs vide G.O.Ms. No.80 dated 6.10.2006. The work is intended to feed Dinnepadu and kalpanayuni cheruvu in Ramapuram Mandal. Which are located at the tail end of right main canal. The ayacut under these two tanks are 70 acres and 130 acres respectively. The work is completed.

R&R centre No.1 is located at the border of Anantapur District with an extent of 81.14 acres. And R&R center No.2 is located near the diversion road joining Veligallu- Thumu Kunta road with an extent of 9.28 acres. Total plots allotted in the two R&R centers for displaced families are 559, and almost all the houses were constructed by the beneficiaries themselves with financial support under R & R policy. The infrastructure facilities such as internal roads, Community hall, Grama Panchayat building, school building, drinking water facilities including construction of O.H.T. providing electrification etc., are completed.