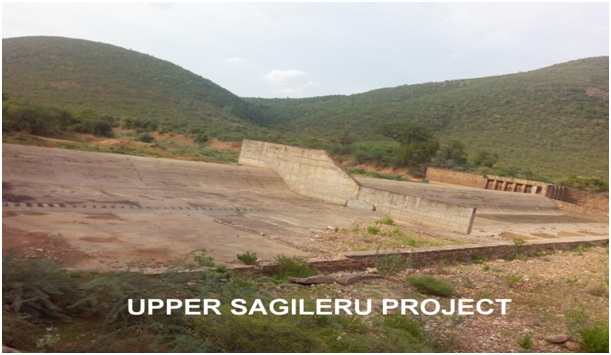 Upper Sagileru anicut was constructed across Sagileru river near Ramapuram village in Kalasapadu mandal in the year 1896. It is a medium irrigation project and was maintained by the irrigation section, Porumamilla for Irrigation sub-division, Badvel under irrigation division, Kadapa. Later the anicut along with its 10 feeder tanks and 5 Nos of water users associations was transferred from Medium irrigation department to NTR.TGP.Division, Porumamilla for NTR.TGP Circle, Kadapa under the control of the Chief Engineer (Projects), Irrigation, Kadapa as per the Govt. Memo.No.18955/Maj.Irrgn.V/2010, dt.7.3.2011.

The anicut body wall, abutments, wings, returns and solid apron are in good condition. Major portion of tanks on the D/s of apron was washed away and retrogression took place on the D/s side of apron. This damaged portion has to be rectified immediately to safeguard against further damage.

The Upper Sagileru project anicut was intended to feed 10 Nos of tanks with its feeder channel in PTS channel upto Porumamilla tank namely,

The maintenance of USP system is now brought under the control of Telugu Ganga Project and it is proposed to take up improvements to this system of tanks at a cost of Rs.3.22 Crores.