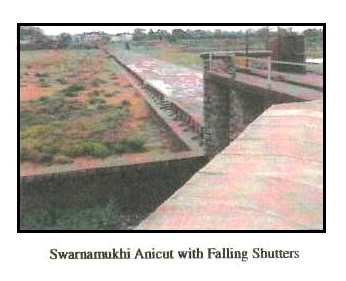 Swarnamukhi aniucut system is a medium irrigation project constructed during the years 1954-60 near Srikalahasti town in Chittoor District. This is a diversion scheme. The anicut has a main canal (Chembedu Canal) running for a length of 15.40 Km taking off from the right flank of the anicut and caters to irrigation needs of 10,200 acres duly feeding 46 system tanks in 25 villages of Thottambedu, Buchinaidu Kandriga mandals of Chittoor District and Pellakur Mandal of Nellore District.

The ECV of the work is Rs. 18,15,66,000/-. Agreement for the work was concluded for an agreement value of Rs 18,90,47,079/- at 4.12% excess over ECV by the Superintending Engineer, Irrigation Circle, Chittoor vide Agreement No. 70 SE/2008-09 dated 27-2-2009 with M/s. Ratna Infrastructure Projects Pvt. Ltd., The period of completion is 30 months from the date of entering into agreement. The work is in progress. Restoration of system tanks, construction of surplus weirs, and construction of O.T.Sluices are in progress. The value of work done is Rs.3.00 Crores. Review meetings were conducted on slow progress of works and issued notices to the Firm to expedite the progress of work.