The mandals benefitted out of this project are Kondapur mandal of Nellore district, Lingasamudram & Guduluru Mandals of Prakasam district. The Assembly Constituency of this project is Kandukur. There are 6 No's of Water Users Association and one Project Committee was formed. During operation in pre-monsoon period, old spillway Gate no. 1&3 got snapped and counter weights fallen & damaged. The repair work was completed on 27-01-2009.

There is a gap ayacut of 3,400 Acres under this project. Hence modernization of this project is proposed under JICA loan assistance with an amount of Rs. 23.00 crores. Improvements to head works, C.C lining for main canal and branch canals along with repairs / reconstructions of CD/CM structures are proposed.

Rallapadu project is taken up for modernization with JICA loan assistance to bridge the gap ayacut. Government have accorded administrative approval for Rs.2300.00 lakhs and technical sanction is also accorded. The tenders are being called for

The tenders are being called for. The modernization work will be started after concluding the agreement. 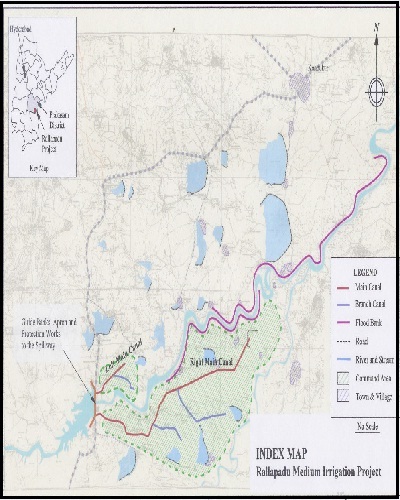