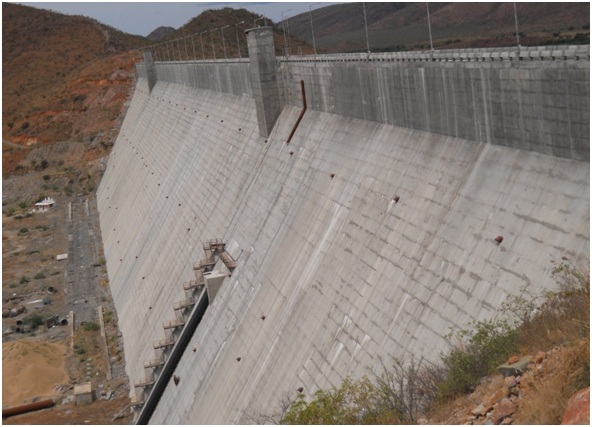 Poola Subbaiah Veligonda Project comprises of Nallamala Sagar Reservoir which is being formed by constructing CC NOF Dams across the three gaps namely Sunkesula, Gottipadia and Kakarla. It envisages to draw 43.50 TMC flood water of Krishna River from the foreshore of Srisailam Project Reservoir through Kollam Vagu (Upstream of Srisailam Reservoir) by twin Tunnels by gravity and thereafter, to impound in Nallamala Sagar Reservoir through a Feeder Canal.

The stage-I proposals were prepared based on the D.P.R. 1994. The D.P.R. 1994 envisaged the flood availability of Krishna river in Srisailam Reservoir as 45 days. Hence for the stage-I requirement 10.7 TMC was planned to draw from Srisailam Reservoir by means of 7.0 mt. diameter tunnel with a discharge capacity of 85 Cumecs in 45 days. This proposal was finalized during the year 2004-05.

However, when it was decided to take up the stage-II works of V.G.P the second Tunnel of dia 9.20 m with a discharge capacity of 243 Cumecs is designed. The total discharge of 328 Cumecs to be drawn is 43.50 TMC from Srisailam Reservvoir Project. The Government issued G.O.No.170 Dt:13.04.2005 in which flood water drawl days has been reduced from 45 to 30 days.

2. The Hydraulic Particulars of Srisailam reservoir Projects are :

4. The Hydraulic Particulars of Tunnel - I & Tunnel - II of Poola Subbaiah Veligonda Project are :

ii. To stabilize the wet ayacut of 6,500 acres under Cumbum Tank.

ii. To stabilize the wet ayacut of 6,500 acres under Gandipalem

A total of 11 villages are coming under submersion of the project.

Socioeconomic Survey is completed in all the villages and structure compensation is paid to 8 villages.

R&R centers are identified for 6 submerging villages and the works of providing infrastructural facilities are in progress.

The following are the villages coming under submersion

HP'S OF Feeder canal feeding to the Nallamala Sagar Reservoir

HP'S of canal system off - taking from the Nallamala sagar Reservoir

Administrative approval by the Government for an amount of Rs.5150.00 Cr was accorded in various GOs.