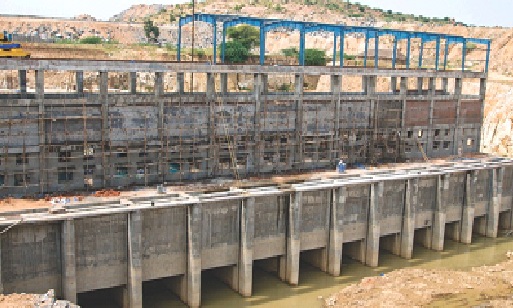 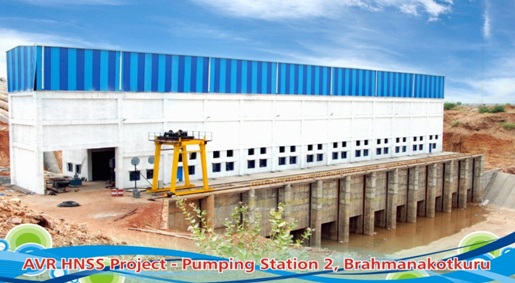 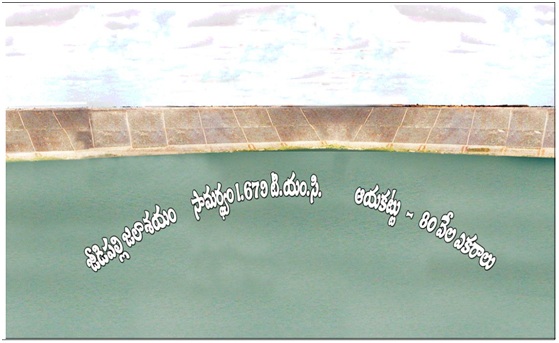 The H.N.S.S. Project is conceived to provide irrigation facilities to 6.025 Lakh acres (Khariff ID) in the four districts of Rayalaseema and supply of drinking water to about 33 Lakh People, utilizing 40 TMC of flood water from the Krishna River. This flood water is to be drawn from the foreshore of Srisailam reservoir with an approach channel of 4.806 Kms length and the Main canal runs for a length of 565 Kms. Water is to be drawn during the 120 flood days from August to November. This scheme involves lifting of water in 9 stages in Phase-I Main Canal and 4 stages on Phase-II main canal with a total lift height of 369.83 m (Phase-I: 291.83 M + 77 M Phase-II), excavation of 5 Nos. of tunnels for a total length of 17.00 Kms in Phase-II and formation of 8 balancing reservoirs enroute (3 No of Reservoirs in Phase-I i.e.1. Krishnagiri 2.Pathikonda Reservoir 3. Jeedipalli Reservoir.and 5 Nos of Reservoirs in Phase-II i.e., 1. Gollapalli Reservoir2. Cherolopalli Reservoir 3.Marala Reservoir 4. Srinivasapuram Reservoir 5. Adivipalli Reservoir.

Excavation of Four branch canals proposed along the Main Canal under

The water utilization proposed under the project is as follows:

The Ayacut Proposal under Four Districts is as follows:

HNSS Project Phase-I, starts near Malyala(v), Nandikotkur(m),Kurnool District and contemplates lifting 14 TMC of water from Krishna river from the foreshore of Srisailam reservoir in 9 lifts (including Muchchumarri Lift) ranging from 24 to 31.20m height, including construction of 3 reservoirs on main canal, and to convey them through HNSS canal of 216.00 Kms length connecting to the pump houses, to provide irrigation facilities to 1,98,000 acres in Kurnool and Ananthapur Districts besides providing drinking water to a population of 10 lakh in 144 villages. One Branch canal i.e., Peruru Branch Canal (80,600 Acres) with 3 lifts is included in Phase-I.

The works of Phase-I are taken up under EPC turnkey system in 27 Packages (Civil works) and the Main Canal works from Km.(-) 4.806 to Km.216.300 i.e.,up to Jeedipalli Reservoir were completed and distributory works are in progress. The works of Mechanical package works (lifts) are at completion stage. 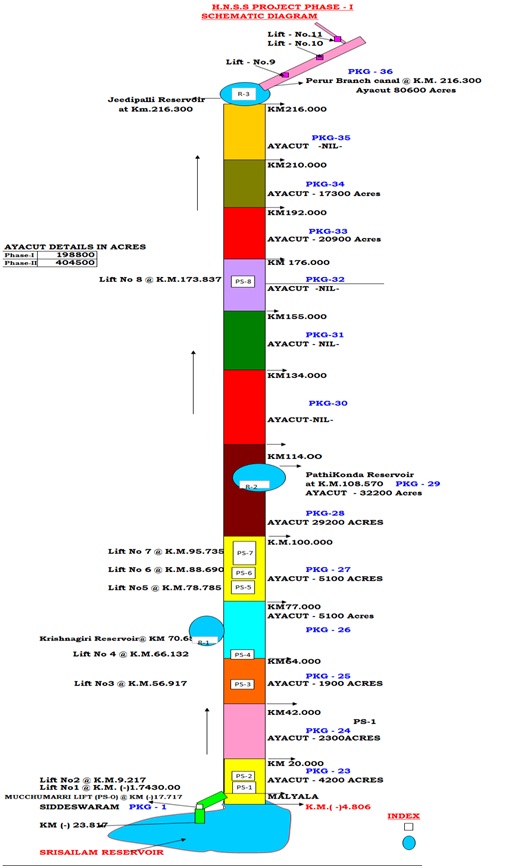 Peruru Branch canal takes off from Jeedipalli Reservoir and runs for a length of 6.07 Kms. 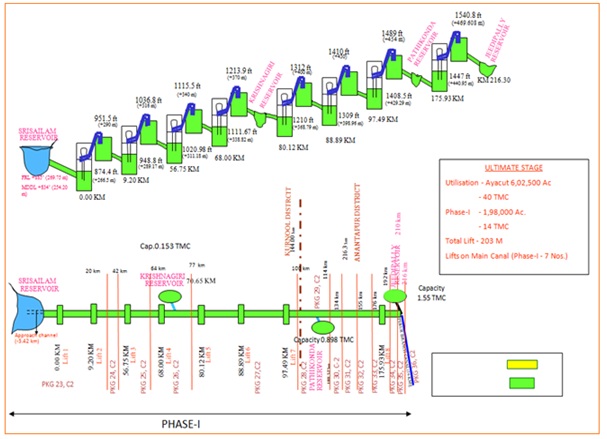 Reservoirs proposed in Phase-I are

Pathikonda Reservoir is located near Pandikona Village of Pathikonda Mandal in Kurnool District with the coordinates Latitude :15°26'47" N and Longitude :77°33'06" E and at KM 106.100 of HNSS Main Canal.

The Balancing Reservoir is proposed to provide an ayacut of 61400 Acres and drinking water to drought prone mandal in Kurnool District through two Branch canals.