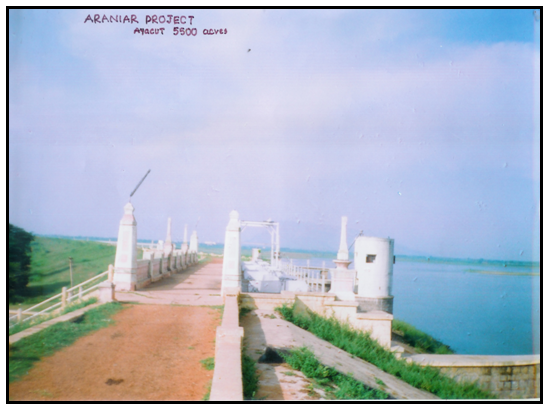 Araniar Project is a Medium Irrigation Project commissioned in the year 1958 to serve 5500 acres khariff and 3600 acres Rabi ayacut benefitting 12 villages in Pichatur (M) in Chittoor District. Due to the max. flood during 12/2005 all tanks located in the catchment were got surplused, suddenly heavy inflows flooded into the reservoir. Due to breakage of gear wheel shaft the gates could not be opened. The bund was cut opened for 15 m on the extreme left flank near the Natural âBy-washâ in order to save the lives and properties. As remedial measures Modernisation of entire Araniar Project including construction of a new spillway regulator was taken up.

The project was posed for modernization under JICA phase-II with an estimate cost of Rs 15.00 Crores. The estimate was administratively approved by the Government for Rs.1500.00 Lakhs vide Commissioner CADA Proceedings No.com/cad/APILIP/DEE/183/2011,Dt.17.02.2011. The Technical sanction for the estimate was accorded by the Engineer-in-Chief, Medium Irrigation proceedings dated 2-5-2011 and tenders are invited.