The Torrigedda Pumping scheme is a Medium Irrigation Project constructed on Akhanda Godavari river in Godavari basin at Km 31.60 near Purushottapatnam village in Seetanagaram Mandal of East Godavari District. The location of the scheme corresponds to longitude 18o â 40â-30â E Latitude 17oâ 16â-0â N. The river is a perennial river and assured water is available for the scheme. The water allocated and utilized is 2.50 TMCft.

The Project is contemplated for providing irrigation facilities to an extent of 13758 Acres Khariff wet (Paddy). The project serves 14 villages in Seetanagaram and Korukonda mandals of East Godavari District.

The maximum ayacut irrigated so far is 11,480 acres leaving a gap ayacut of 2278 acres which is due to the long service and deteriorated condition of the canals and CM/CD works etc.,

The designed life of the project is 30 years and the project has outlived its life. The Pumping Machinery, Pump house etc were replaced during 2000-2003 with a cost of Rs 806 lakhs as the pumps have outlived the designed life. Therefore, head works do not require major repairs except for an approach road to the head works and pumping main and erection of 33KV tranformers. However, the canals though damaged badly at many places could not be repaired due to paucity of funds. Maintenance grants released so far were insufficient to take up complete rehabilitation.

The canals require lining in vulnerable reaches where seepage is observed and thus there is a gap ayacut.

Therefore, it is proposed to line the canals in vulnerable reaches and repair the structures at certain places. The CM & CD works in general are in working condition and do not require major repairs.

Two water users associations (WUA) and one Project Committee (PC) are established for the project. The farmersâ organizations have represented to construct new single lane / double lane bridges on the canals at certain locations to facilitate crossing of the canals for approach to their fields. Therefore, provision for new SLBs are made in modernization proposal.

Crop water requirement was studied in detail in the detailed project report and submitted to JICA. Water availability and water balance study may not be necessary for the project as this is a pumping scheme and there is no scarcity of water as the Godavari river is perennial.

The gap ayacut of about 2270 acres is due to deteriorated condition of the canals as they outlived their life due to inadequate maintenance of canals and distributory system. It is expected that after modernization, this gap ayacut will be reduced.

As per Participatory Irrigation Management act 11/1977 Two water users associations (WUA) and one Project Committee (PC) are established for the project. However, Active participation regarding the operation of the canals is absent among the farmers organizations due to lack of knowledge and motivation among WUAâs.

The project does not require any forest and environmental clearance. No land acquisition is involved and therefore R&R does not arise. 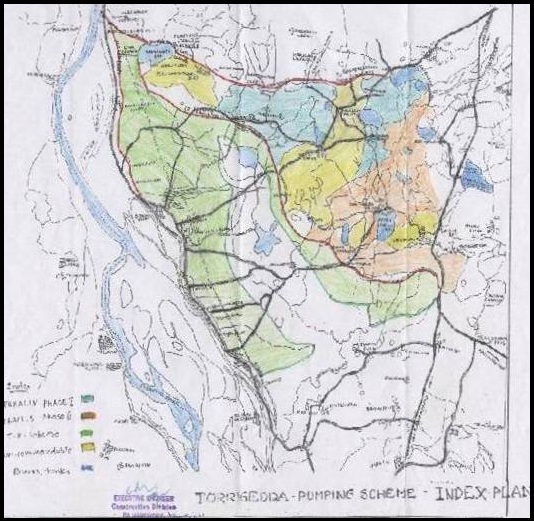